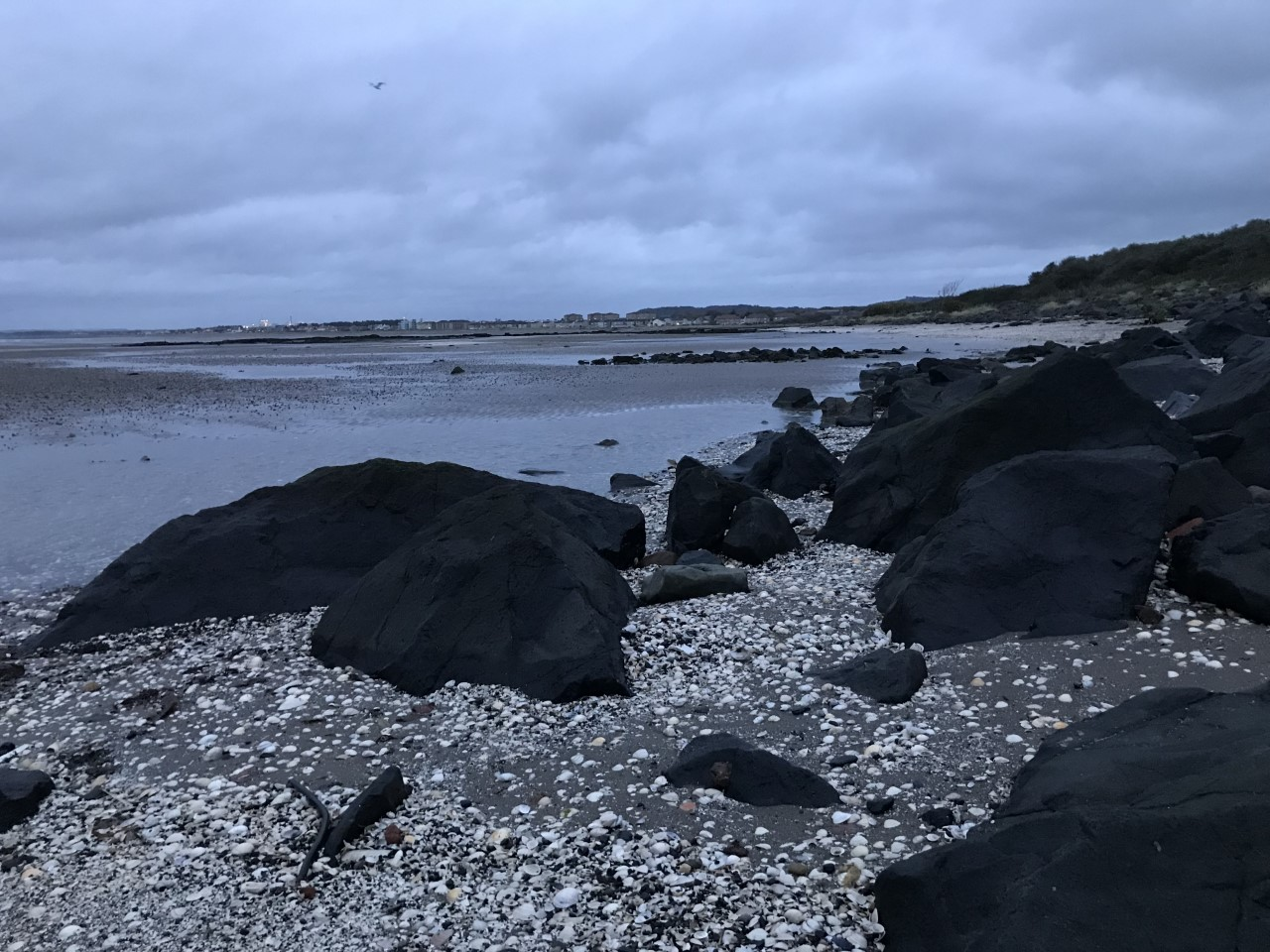 James Hill visited the COP26 Green Zone in Glasgow as part of a group of Scenario DTP students.  As Glasgow was busy, they stayed in Troon and commuted in. These are his personal reflections on the experience.

In the morning I take a walk along the beach. Clouds fill the sky, tinted blue by choppy waves. In front of me are black boulders jutting from grey sands and in the distance are the lights of ships obscured and softened by the ocean fog. Crackling under my feet is a carpet of white shells of numerous shapes and sizes and when I look up and out at the water, I see there something expansive and uncontrolled. In this solitude I am but one tiny body amongst much bigger things, but I feel as if I am one great and peaceful mind, entirely rooted in the knowledge of the world. Then the wind picks up and swirls and it carries on it a haunted wail of some machine or ship. The sound fills up the sea and it fills up the shells and it fills up the spaces in between the rocks. I look over to the harbour in search of the sound and I see a tower belching smoke and so COP26 begins.

We leave the harbour town and make our way to Glasgow. The city has been turned into one big COP attraction and all the big names have turned out to show their colours and those colours are many shades of green. The airport is green, the bars are green, the supermarkets and hairdressers are all green. I walk past a march and feel a great suspenseful mood. Two locals chat behind me, remarking casually that ‘you’d never recognise that you were in Glasgow’. 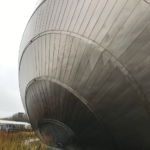 Our destination is a large silver sphere being battered by the rain. Within the sphere is the ‘Green Zone’, a subsidiary event of COP, where the public can engage with performances, exhibitions and talks relating to environmental issues. Across the river is the ‘Blue Zone’, a huge silver pyramid where the global officials have gathered to negotiate the most pressing environmental issue of our time- man made climate change. The sphere is an uncanny space- business execs lyrically praising ecology, Steve Backshall selling his new shark film on huge IMAX screens and Deborah Meaden extolling the virtues of civil unrest. Within each presentation is a kernel of reason surrounded by a through-line of confused hypocrisy. There are the businessmen in their marketing booths, using their buying power to make tangible positive change in the world, while simultaneously persisting to sell us more and more superficial tat. The artist with his air of individualistic authenticity is quick to point out these contradictions, seemingly cutting through the superficial, corporate jargon. When asked what he makes of the conference, he eagerly points out- ‘there’s a green formula 1 car in the lobby, that says it all’. In the moment it feels so punchy and intuitive that it must speak to a deeper truth but after a moment of consideration the points turn to vapour, after all here he is with his installation, as inspiring as it may be, funded by the very benefactors he bemoans. Then there are the youngsters, so full of life and compassion, making a stand against the wall of calculating adults. Their romantic spirit is so admirable, enviable even, that it is tempting to get swept up in their dreams without recrimination, but with this passion comes naivety and sentiments so radical that they forgo the responsibilities of adulthood- ‘we demand an end to capitalism now!’ is about as useful as a trip to pleasure island in the battle against climate change.

It is these contradictions and diversities of opinion that make the marketplace of ideas so enthralling and energising. I hope the many voices can coalesce into a more harmonious future, yet for me the experience is ultimately too overwhelming. These voices all tug and tear and instead of feeling like I’ve been part of something tangible and constructive, I feel I have simply been sold a bill of goods by the Green Zone. Finally, and most frustratingly, of all the voices I hear in Glasgow the only one that falls silent is that of the politicians in the pyramid across the river. They must be in there, behind the barricades and armies of police officers, so concealed that they can’t even be seen, let alone be heard. It beggars’ belief that these negotiations, which are the entire point of COP26, should be so completely inaccessible to those who have been bothered to show up. When the voice of reason makes so little effort to proclaim itself, perhaps it’s inevitable that polarisation and hypocrisy will come to fill in the empty space. I trust that within this hidden fortress the real work is being done, that intellectual precision, ethical responsibility and political pragmatism is being weaved together to negotiate something real but when the voice is so whisper quiet how am I to tell?

When I was on that beach on that cold and foggy morning, I felt like I understood myself, from the briny waves to the belching smoke tower, my relation to the world was clear. My experience at COP26 was anything other.

James is a final year NERC Scenario PhD student studying environmental science at the University of Reading. You can contact him via email at hsjhill3@hotmail.com or via twitter/instagram @JHForestScience.