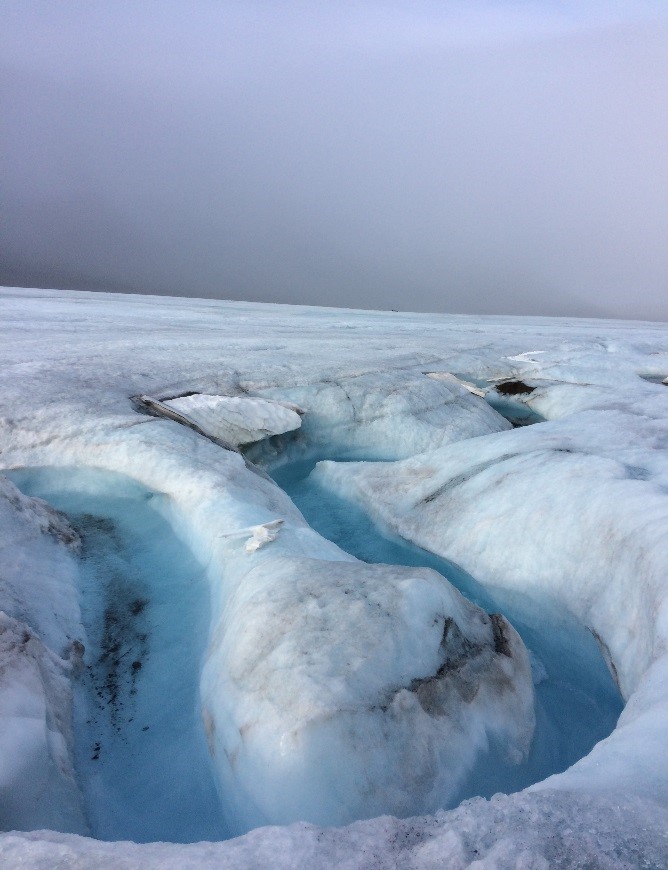 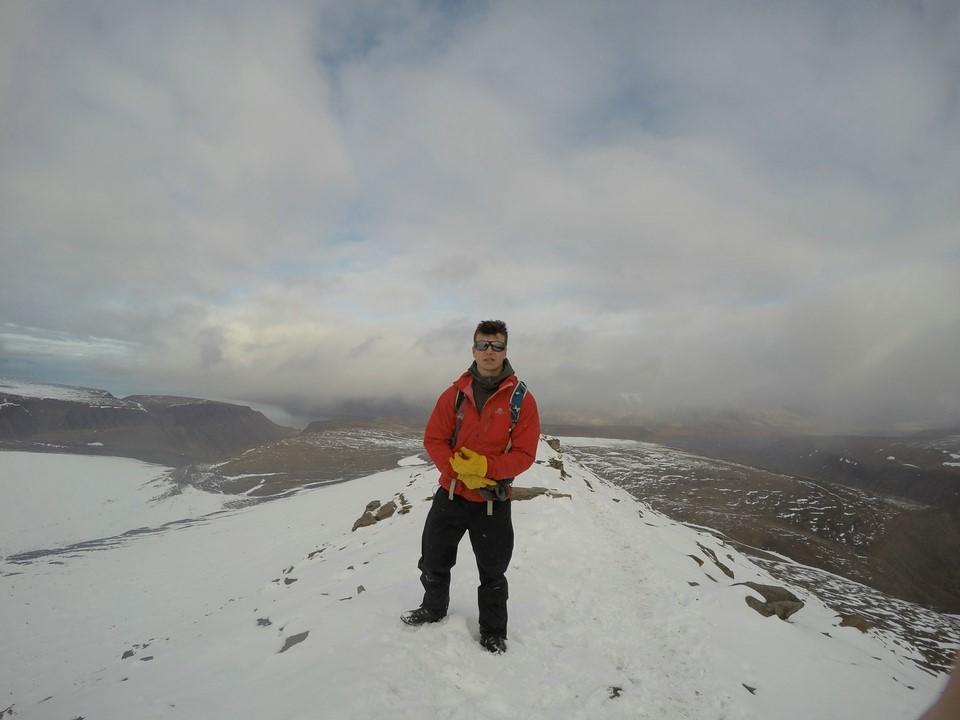 I spent two weeks on a British Antarctic survey short course “safe and effective field work in the polar regions” from 21st August – 3rd September. The course was advertised to NERC PhD students and I was one of 12 successful applicants in 2019. The other students on the course were from a range of study backgrounds including; Geology, Oceanography, Ocean chemistry, Engineering and Biology. The course started with 3 Days at BAS headquarters in Cambridge; here we had talks and practical sessions each day focusing on some of the logistical challenges working in polar environments. One memorable task was a practical session in which we had to calculate different logistical options for moving field gear to an experimental site in Antarctica. Calculating their respective fuel costs, is far harder than first imagined. Other focuses for talks included health and safety, this talk was no ordinary H&S lecture and was both informative and exciting because of the real dangers and challenges in the Polar Regions. We were introduced to a “lemon” technique in which you visualise your expedition as a slot machine and every time you take a risk you have the potential of collecting a “lemon”, if enough of these “lemons” line up in the metaphorical expedition slot machine you will have an accident. We continued to refer to lemons throughout the week and perhaps will continue to recognise risk in this way for some time. Finally whilst still in Cambridge we learnt about the advancements in remote sensing with satellites and GPS in both costs and what is possible. I had my first experience using ArcGIS, a useful skill which I plan to spend some time practising.

The course then moved from theory to practical and we left a balmy 300 C in Cambridge and flew north into the Arctic Circle to Longyearbyen Svalbard. Longyearbyen is an old coal mining frontier town and is the largest town in the Svalbard archipelago with a population of around 2000 people. We arrived during the last of the summer season in time to still experience strange 24hr sunlight. We spent one day with a local guide and hiked Trollsteinen a peak of 800m which required a crossing of my first glacier and , even more worryingly than crevasses, my first experience of open polar bear country; where is mandatory to carry a high calibre rifle.

On this hike we experienced some white out conditions with the clouds clearing occasionally to reveal fantastic views across the peaks and fjords. The geologists on the course where particularly interested in the fossilized leaves (some still with leaf material in them) that indicated the freezing glacier we were standing on had once been warm swamp lands.

After our two days in Longyearbyen we boarded a charter plane and took off in gusting force 9 polar winds to fly further north to the NERC-BAS Arctic base in Nyålesund. Nyålesund is a Norwegian government ran facility managed by Kings bay, each country with a polar interest has a station here including; China, India, Korea, and many European countries including the British NERC base we were visiting. Each country has their own independent building but eat together in a communal mess overlooking the fjord and watching ice bergs float by. On our first day we spent time learning about the risks of polar bears in whilst we were in the field. This included time on a rifle range to practice safe use of a .308 rifle and flare pistol. Here I earned a diploma in weapons as protections from polar bears, which I am particularly pleased with on my CV. Once we were safely trained for work in the field we could begin field work at both land and sea.

To appreciate the difficulties of field work on land we were tasked with organising a field excursion to the nearby Midrelovenbreen glacier to map the underlying rock bed. This required carrying all the equipment over to the foot of the glacier, around 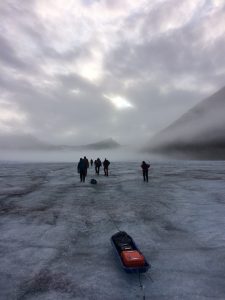 4 km from the research base. We had to do this in shuttles and leave the gear in a cache in a similar technique used in the Antarctic. We appreciated how important it was to be organised as even with this relatively simple experiment we had a lot of equipment to remember and set up. We learnt a valuable lesson as one cable was broken and we did not have a spare. Had this been a big budget Antarctic field work this could be disastrous. We still dummy ran the experiment and towed the radar sledge up the glacier.

To complement our time on land we spent time on two boats to undertake some polar marine science. We spent an afternoon aboard the station vessel Tiesten deploying Niskin bottles, plankton nets, a sediment grab and CDT into the deep waters of Kongsfjord. We then took a selection of samples back to the lab and spent some time looking at the organisms we had found through microscopes. 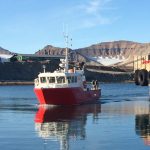 To look at some larger organisms we set fish traps baited with mackerel and hauled them after two days; we caught spider crabs and strange arctic fish named Sculpins. We had the chance for some sightseeing from the NERC rib (a tough boat called a polarcirkel) where which we got close to a marine terminating glacier and navigated through sea ice to listen to the creaking glacial ice. Nick Cox the NERC station manager skippered the boat, he is an experienced sailor, dog sled expert and all round fascinating man from whom I learnt a lot from his endless expedition anecdotes over the week.

At the end of our trip we left Ny ålesund in style aboard a 1950s cruise ship named Nordstjernen. This was an extremely memorable trip and we enjoyed an evening watching Minky wales and viewing the wild coastline as we steamed 9 hours back to Longyearbyen. On this journey I had the opportunity to reflect on the trip. I learnt a lot about the challenges but also the rewards of working in the polar regions and I hope that in my future career I can use some of the experience I have learnt and perhaps even collaborate on important projects in exciting parts of the world. 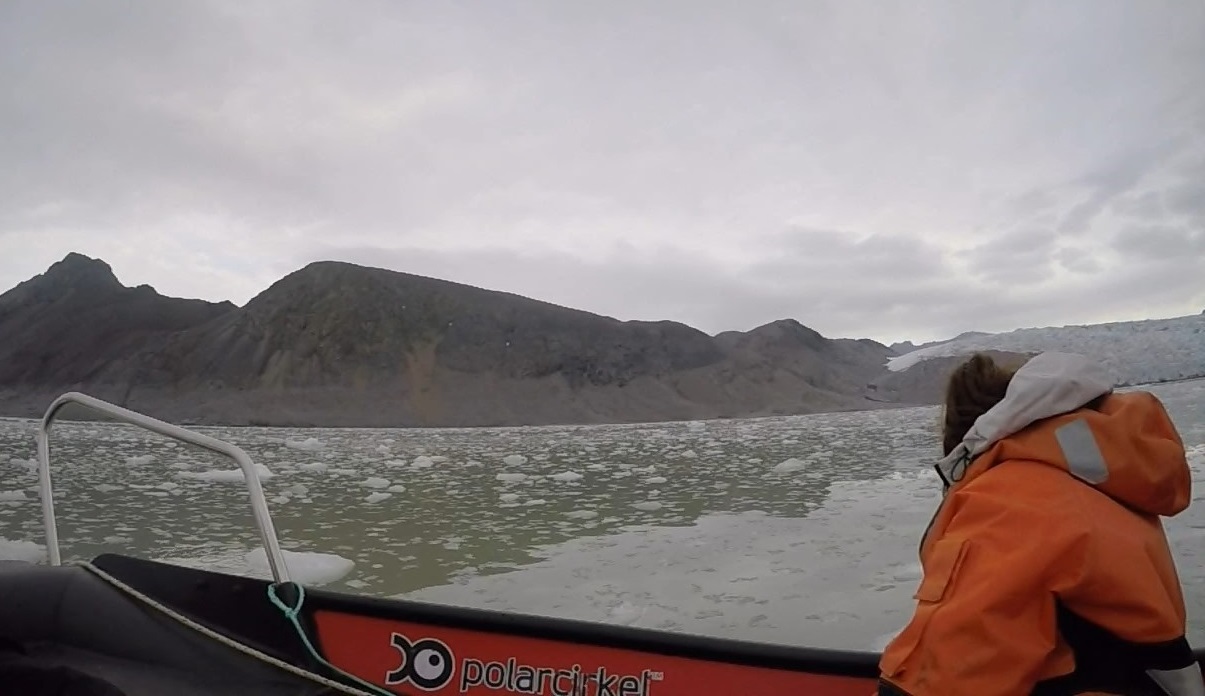