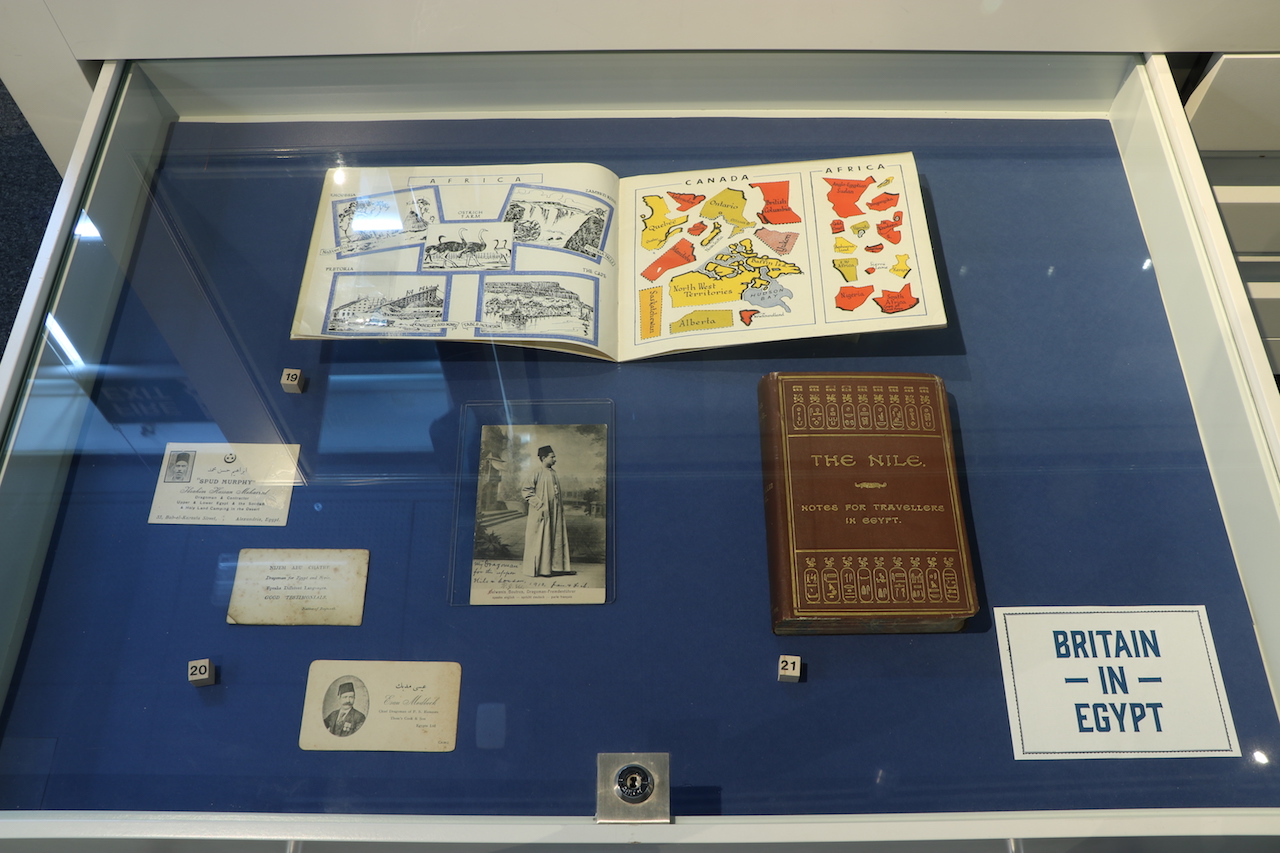 Children could use this book to create their own maps of the British empire by cutting out the shapes of the countries and pasting them into a map template.

Although Egypt was by this time independent, the “Anglo-Egyptian Sudan”, as it was called, was still part of the Empire.  The book included descriptions of different regions of Empire, outlining only their economic potential.

The pages represented here feature images relating to different regions of British colonial Africa. These include, on the left: stereotypical depictions of “native huts” in Rhodesia (now Zimbabwe), and the gold mines in Kimberley, South Africa, where thousands of South Africans were employed. Segregation and discrimination ran rampant there.

The next page includes images of the shapes of countries within the British colonial sphere in Africa, including “Anglo-Egyptian Sudan”.  Sudan gained independence in 1956.

(Top left) The business card of Ibrahim Hassan Mohamed, aka “Spud Murphy”, probably dates to between 1914 and 1945. His nickname may have been given to him by clients.

(Top right) Gelwanis Boutros’s business card features a full-length portrait of himself, against a remarkably Gothic-looking background, perhaps a reflection of the fact that he could speak both French and German as well as English.  One of his clients has written on the card “My ‘dragoman’ for the upper Nile + Soudan, 1913, Jan + Feb”.

(Centre left) Nijem Abu Chatre, who hailed from “Beyrouth” (Beirut, Lebanon), advertised his linguistic skills as well as his knowledge of the antiquities of both Egypt and Syria.

(Bottom) Esau Medbeck worked on the paddlesteamer “Rameses”, a Thomas Cook & Son vessel.  His card, dating to the 1880s, includes a photograph of him wearing medals he had obtained for military service with the British Royal Navy.

Written by Ernest Arthur Wallis Budge, Keeper of the Department of Assyrian and Oriental Antiquities at the British Museum, this book was for tourists taking Thomas Cook & Son steamers. By 1907, the book was in its tenth edition.

Its “Introduction” explains its origin – directly challenging the knowledge and skills of Egyptian dragomans:

“Having for some years felt the insufficiency of the information given by Dragomans to travellers on the Nile, and feeling with one or two striking exceptions how limited is their knowledge of facts relating to the history of antiquities in Egypt, Messrs. Thos. Cook & Son have arranged with Dr. E. A. Wallis Budge to compile the following pages…”

Move on to the next section, Excavating Egypt.