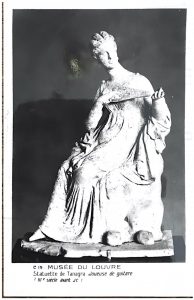 The focus of this blog post is not the instruments themselves but the small archive of letters between Helen Roberts and Annie D. Ure. They reveal a story of academic friendship, the trials and tribulations of studying in a pre-digital age, and how the replicas very nearly ended up in a different museum entirely!

In 1969, Helen had just started researching her PhD on ancient Greek string instruments, supervised by Dr. John Landels, who was well known for his work on ancient Greek and Roman music. But when it came to issues of iconography and museum visits, the curator of the Ure Museum, Annie D. Ure, was her go-to advisor. Annie Ure wrote to Pierre Devambez, the curator of Greek antiquities at the Louvre, for example, to introduce Helen, as was normal procedure. Devambez’s charming reply not only encouraged Helen’s visit but recalled Annie’s: “I hope very much that you also, Madame, return to the Louvre after so many years since we haven’t had you visit, and while I wait for that happy hour….”[1]

Helen’s visit to the Louvre was clearly very productive. She sent Annie a postcard, illustrated with a Tanagra figurine of a women playing a lute, to ask Annie if she had access to a book that might be useful. Of course, this was long before online inter-library loans. Helen’s trip to the Argos Museum the previous year to see the remains of a lyre in that museum had been less successful, as she had visited without any kind of introduction. Recalling this, she wrote to Annie: “… having learnt by better experience that one needs advice and references from people in the know before undertaking research abroad I am conscious to inform you of my plans well in advance. I simply could not bear to undergo last year’s experiences all over again.” We can imagine “last year’s experiences” involved some less than friendly welcomes.

The letters also give us an idea of Helen’s interests in using iconography to inform her understanding of how ancient Greek lyres were made. She wrote to Annie asking her opinions on the accuracy of the painters and if they depicted the “prevalent fashions of the day”, as well as other issues concerning catalogue recommendations. It is clear from these 15 letters in the Ure Museum Archive that Annie & Helen quickly struck up a friendly mentorship, but what about the instruments going to another museum?

The last letter in the collection is from Helen Roberts to Prof. Andrew Wallace-Hadrill, written in May 1988, when he was Chair of the Classics Department. She writes “I am pleased that you have agreed to display my reconstructions in the Ure Museum. They were accepted by the Horniman Museum but I felt that it would be more appropriate under the circumstance if they were exhibited in Reading.” The Horniman Museum is well known for its collection of musical instruments but ever since we have been able to call the Ure Museum home for these replicas, where they have helped to explain the world of ancient Greek music to generations of visitors and students.

As a final note to this little delve into the Ure Museum archives and the history behind our music related collections is that we haven’t been able to track down Helen Roberts, but would love to get in touch. Please do email if you happen to know her details, especially since the lyre is technically on a long term loan!

Helen Roberts’ correspondence is archived as H.26.1-14, 45 in the Ure Museum. You can learn more about the replica lyre and ancient Greek music in our online exhibition The Well-Tempered Lyre: music education in Ancient Greece at https://collections.reading.ac.uk/ure-museum/explore/online-exhibitions/well-tempered-lyre/.  If you want to read some of Helen Roberts’ scholarship on ancient Greek string instruments, you can read her article on Reconstructing the Ancient Greek Lyre

[1] Many thanks to Olivia Jones for assisting with the transcription and translation of the French original.