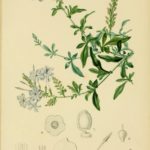 Previous #AdventBotany blogs have been a fairly passive read but this year I’m throwing you a challenge.  Some of the blogs will feature a plant mentioned in a book that has the word Christmas in the title or is at least Christmas themed.  Today’s blog features Plumbago, the first plant to be mentioned in a particular novel based around Christmas.  I hope you enjoy reading about Plumbago, a plant I have a particular affection for, but that you will also Tweet me to tell me the book for which this is the first plant mentioned in chapter 1.

It’s all about Plumbum

This scrambling shrub is native to Southern Africa but is grown widely as an ornamental, including as a houseplant in cool temperate areas and has naturalised in places with suitable climate (Ventosa-Febles, 2020).  It’s often known as the ‘cape leadwort’, and those of you with a knowledge of chemistry will recognise that ‘Plumbago’, like ‘leadwort’ also refers to lead – plumbum.  Those of you with a childish sense of humour were probably just as amused as I was when my school teacher had to explain why lead had the symbol Pb.  Plumbum may well sound like the after effects of too much Christmas pudding but that is not the main thrust of this story.

Plumbaginaceae, the family that includes Plumbago, currently includes over 1100 species (of which about 600 are Limonium, >300 are Acantholimon, 98 are Armeria, and just over 20 are Plumbago), many are tolerant of drought, saline or cold conditions.  Challenging habitats are common in members of this order of plants, the Caryophyllales.  Plumbago auriculata (often known as P. capensis) is perhaps the most widely cultivated and is grown for its masses of pale blue flowers that are produced over a long period.  It is a well known plant in South Africa from where it originates.

Many plants, and Plumabgo is one, are hermaphrodite, so they bear both male and female reproductive organs.  This leads to the challenge posed by inadvertent inbreeding.  So, like the british primrose (Primula vulgaris), cape leadwort shows heterostyly to encourage outbreeding (the transfer of pollen from one individual to another). Heterostyly is a situation where flowers of different plants have different lengths of style (the female reproductive structure) and often differing lengths of stamen (male reproductive structure).  Ferrero et al. (2009) demonstrated that P. auriculata has a sporophytic incompatibility system where the genetic makeup of the male parent governs the incompatibility of the pollen.  This system, paired with pollination by butterflies and long-tongued flies promotes outbreeding.

Naphthaquinones and other bioactive compounds

Which well known novel set at Christmas features Plumbago in the first few lines of the story? Do let me know @botanyRNG