Several publications based upon the Beckett Collection are available from the Beckett International Foundation. 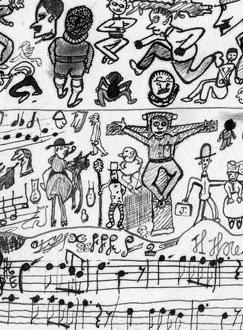 In addition to the publications based on the Beckett Collection, current and back issues of The Journal of Beckett Studies and Samuel Beckett Today / Aujourd’hui are also available to visitors to the Beckett Collection. Cheques must be in pounds sterling and made payable to: “University of Reading: Beckett International Foundation”.

Beckett at Reading: Catalogue of the Beckett manuscript collection at the University
of Reading

This new catalogue from the Beckett International Foundation provides full and detailed descriptions of manuscripts relating to over 100 works of prose, drama and poetry, the earliest dating from the mid 1930s, the latest from the early 1980s. It is a catalogue compiled by scholars for scholars and significantly enlarges upon the 1978 catalogue and its subsequent supplements.

Between 1930 and 1932 Beckett entered almost 1200 items in a hardbacked notebook which he used on the way to writing his first full-length novel, Dream of Fair to Middling Women, published posthumously in 1992. The range of references is unusually wide even for Beckett, including a life of Napoleon, studies of Chinese music and civilization, a book on astronomy, classics of religious thought and what booksellers used to call ’curiosa’. The jottings help to explain much which has previously been considered obscure or not worthy of comment in Beckett’s writings before Murphy, with some items even pointing forward to En attendant Godot and the ’Trilogy’ and as late as Not I. No other notebook contains so much raw material to be used (or abused) as Beckett saw fit, and not even James Knowlson’s biography brings us quite so close to the mind and creative practices of the young Beckett. Beckett’s Dream Notebook is quite an exceptional sourcebook, indispensable to anyone seeking to understand Beckett’s development. This is the first such notebook to be edited and annotated, permission for publication having been generously granted by the Beckett Estate.

The Ideal core of the onion

The Ideal core of the onion: Reading Beckett archives

‘On in their Company’

‘On in their Company’: Essays on Beckett, with Tributes and Sketches presented to Jim Knowlson on his 80th Birthday.

Contents:
Limited to 150 copies and published by the Beckett International Foundation at the University of Reading, this book assembles 13 essays by leading Beckett scholars and 5 tributes to celebrate the 80th Birthday of Emeritus Professor James Knowlson.

On in their Company can be purchased here.