Tim Parkinson is a composer, pianist, and curator. His music has been described as "reconstructing music from the ground up" and "sounding like nothing else". Parkinson studied at Oxford, and in Dublin with Kevin Volans. Among his numerous recordings are albums including Here Comes A Monster (Takuroku 2020), Pleasure Island (Slip 2019) and Piano Music 2015-16 (all that dust 2016). His opera, Time With People (2012-13), has been widely performed at venues from Huddersfield to Chicago and Brussels, and his work has been performed on BBC Radio 3, Resonance FM, and numerous other outlets. Examples of Tim’s work can be found at his website: www.untitledwebsite.com.

Parkinson has organised many public concerts to promote the presence, wealth and variety of present day music exploration. One example of this is the annual concert series, Music We'd Like to Hear (www.musicwedliketohear.com), which he has co-curated with John Lely and Markus Trunk since 2005. In 2011 he was visiting Professor of Composition at Brno Academy. He has also given lectures at Guildhall School of Music and Drama, Oxford Brookes, Ostrava New Music Days, Huddersfield University, Bath Spa University and Snape Maltings, as well as teaching at Ashmole Academy and Christchurch Primary School.

In 2018, Tim became the Centre's second Creative Fellow, using his experience of working with the Beckett archive to inform his own creative process. The result was a new composition entitled string quartet 2019, which was premiered by the Plus-Minus Ensemble during our annual Beckett Week in November 2019.

The film of the work that Tim created from his Fellowship can be viewed below:

The performance involved the musicians being encased or 'archived' in a large black box, pictured below. Photo credits: ©Mark Knoop 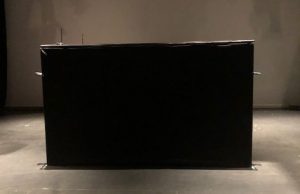 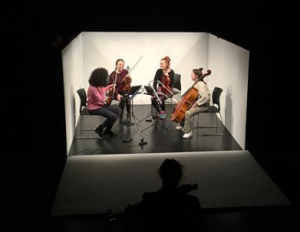 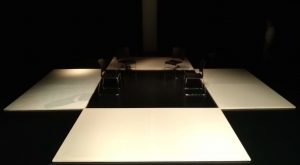 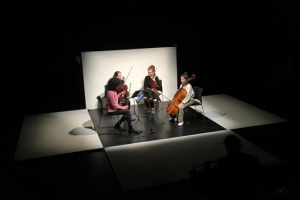 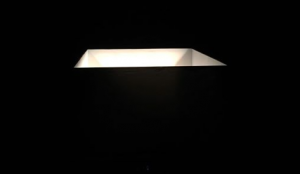 During his fellowship, Tim kept a record of his experience working with the Beckett materials. You can read about this by clicking on the link to the right. 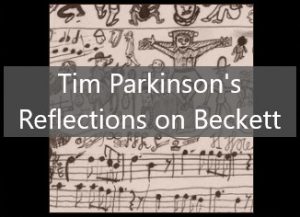