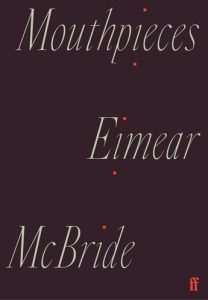 Award-winning novelist, Eimear McBride, grew up in the west of Ireland and studied acting at Drama Centre London. Her debut novel, A Girl is a Half-formed Thing, received the inaugural Goldsmiths Prize, the Baileys Prize for Women's Fiction, Kerry Group Irish Novel of the Year, the Desmond Elliot Prize and the Geoffrey Faber Memorial Prize. Her second novel, The Lesser Bohemians, won the James Tait Black Memorial Prize and was shortlisted for the Goldsmiths Prize, Irish Novel of the Year and the RSL Encore Award. She occasionally writes and reviews for the Guardian, TLS, New Statesman and New York Times Book Review. She has also featured on several BBC radio programmes, including 'The Verb', 'Free Thinking', 'Only Artists' and 'A Good Read'.

In 2017, Eimear became our inaugural Creative Fellow. Setting out to create a new piece of creative work inspired by Samuel Beckett, she had unique access to the internationally recognised Beckett archive at Reading, and could draw on academic expertise within the Centre to gain in-depth knowledge of the Irish novelist, poet, and playwright. On receiving the fellowship, she said: "It's a tremendous honour, and pleasure, to be the inaugural holder of the Samuel Beckett Creative Fellowship and I'm very much looking forward to the daunting task of creatively engaging with Beckett's inestimably important archive".

The fellowship offered Eimear a special encounter with Beckett's creative process. She had unlimited access to the largest collection of publicly accessible Beckett materials in the world, including notebooks that the author kept while he worked, and drafts of his fiction, poetry and drama. Out of the experience of working with the archive, and her particular interest in the holdings related to Beckett's last work, Stirrings Still, Eimear has made a radio programme. In the programme she interviews Beckett's biographer, Jim Knowlson, and members of the Centre, about Beckett's late writing. The programme can be heard at: 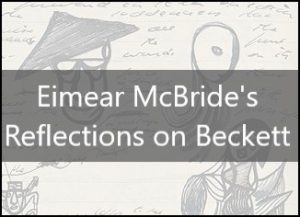 Eimear kept a record of her experience working with the Beckett materials as she produced the new creative work, Mouthpieces. This is a triptych of miniature plays, each depicting a fragment of female experience. A recording of Mouthpieces is available below (courtesy of RTE Radio 1). Click on the link to the right to read about McBride's creative process and experience of Beckett's work.