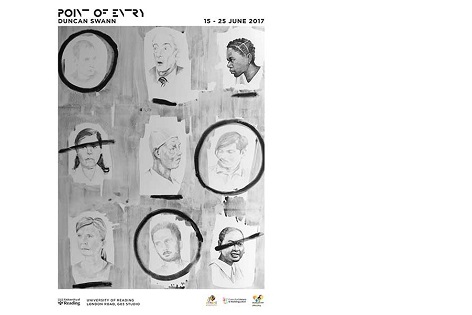 In legal terms, a port (or point) of entry is a place where one may lawfully enter a country. In computer programming, entry point is a memory address, where control is transferred from the operating system to a computer program, at which place the processor enters a program or a code fragment and execution begins. This exhibition, Point of entry, is meant to be a reflection on the strong – and often concealed – ties between boundaries, identities, selection, and memory.

Boundaries as borders, defining one’s status – accepted vs rejected – and right to stay in a given place in a given time. But boundaries also as porous demarcations: between here and there, now and then, visibility and concealment. Between ‘identity’ and ‘identification’, to borrow a fruitful concept from Stuart Hall. Because identity, which puts stress on status, can be neglected, or denied, and this constantly happens to people that are seeking shelter (refugium in Latin), and a legal recognition granted by an ID. Whereas identification emphasises an ongoing process, which cannot be rejected or isolated or regulated, and which belongs to all human experience. Memory in this context is the key to overcoming boundaries, categorization, and labels (citizen, migrant, refugee…), an opportunity to familiarise with the dynamic porosity of “us” and “them”, in time and space. And an undefined space for reconfiguring the self’s narrative in a broader open collaborative narrative.

The singular ability of Duncan Swann is to drag us into the complex ambivalence of point of entry/entry point, and make us reconsider preconceptions and misconceptions of boundaries, identities, selection and memory. Layers of visual information present themselves as programmed stratifications (fragments of a given code, predictable operations of a system, destinies processed and selected) but also as their opposite: poured paint, fading profiles, overlaps of figures for an unpredictable outcome. The apparent standstill – history at a standstill, to quote Walter Benjamin – becomes animated. The selection then becomes random, casual, arbitrary (why us, here, quietly viewing paintings in a gallery, and them out there, displaced, exiled, unwelcomed?) but also disturbing (what if we were them?) and puzzling, with a “geographical discrepancy between here and there and a temporal maladjustment between past and present”[1] which becomes more and more visible. And this visibility brings to the surface not only a handful of questions, but also a challenge that cannot be avoided and silenced any longer. Because, ultimately, in everybody’s life there is an element of chance, and change, which escapes the matrix. To choose, instead of being chosen: a possible point of view, instead of a given point of entry.