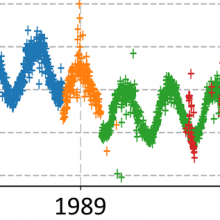 Recently, users of climate data records have been asking us how they should use FIDUCEO harmonised Fundamental Climate Data Records (FCDRs). These queries have made it clear that the users can separated  into two groups — one that uses the data for assimilation, and one that uses the data for the retrieval of essential climate variables defined by the WMO Global Climate Observing System (GCOS 138, 2010). Although both groups pursue the same scientific goals, i.e., providing data records that enable detecting long-term trends in climate variables, they differ in their requirements.

Users of harmonised data records need to realise that, when they plot time-series of these data, they will see artificial jumps (see Fig A). These jumps are mainly explained by well characterised and known differences between the sensors, such as by differences in their spectral response. There may be differences remaining that are either more difficult to characterise, such as differences due to sensor non linearity, or that are unknown. Since assimilation procedure rely on forward radiative transfer calculations, it is possible to consider the sensors’ spectral responses, and correctly account for artificial jumps.

Figure A: Graphical illustration of the difference between time-series of original calibrated and harmonised calibrated data record.

The group that uses FCDRs for the retrieval of essential climate variables also asks for well calibrated data including SI quantified uncertainties. However, these users also prefer data records from different sensors that look the same over the same location at the same time. This is especially true for users of visible channel data. Because their retrieval algorithms rely on computational very intensive radiative transfer calculations, it is not feasible to perform forward radiative transfer calculations, as is done for data assimilation. The requirements of these users are well addressed by data records that FIDUCEO defines as homogenised data records:

“Each sensor is forced to look the same such that when looking at the same location at the same time they would (in theory) give the same signal.”

In case the sensor-to-sensor biases are mainly explained by sensor-to-sensor differences in spectral response, the time-series of homogenised data records tend to become temporary stable over invariant targets. However, forcing all sensors to have the same spectral response introduces additional uncertainties, which increase with increasing differences between the sensor’s spectral response (see Fig B). As long as these uncertainties are not too large, homogenised data records can be used for the retrieval of essential climate variables.

Figure B. Graphical illustration of the difference between harmonised and homogenised calibration. The shaded areas represent the uncertainty associated with the adjustment to the reference sensor (spectral band adjustment). Typically, these uncertainties are at their largest when the spectral response functions of the actual instrument and reference instrument differ much.

FIDUCEO’s FCDR of recalibrated visible channel reflectances from the Meteosat Visible Infra-Red Imager (MVIRI) sensor on board Meteosat First Generation satellites is to be considered a harmonised data record. This is because the applied calibration method, which compares observed sensor reflectances for predefined sites against simulated top of atmosphere reflectances, takes into account the sensors spectral response function. When looking at the time-series of recalibrated bi-directional reflectances (BRF) over the desert of Algeria (Fig. C) it becomes apparent what harmonisation means. As expected, the time-series reveals significant jumps between the different satellites. Moreover, slight trends are visible in the time-series of individual sensors. These jumps are mainly explained by the fact that each sensor has different spectral response and, thus, are supposed to measure a different signal. The trends may be explained by the fact that the spectral response of an individual sensor change shape with time. This is because the detectors are degrading more rapidly in the blue part of the spectrum than in the red part of the spectrum. This, so called spectral degradation, implies that with time even the same sensor may measure a different signal over an invariant target. In particular, spectral degradation plays an important role for satellites with a long lifetime, such as Meteosat-7 or Meteosat-2.

In order to find out if the MVIRI visible channel data record is capable of capturing temporal changes of climate variables, it needs to be verified that an invariant target at the Earth surface is stable in time. Consequently, artificial trends and jumps need to be removed, i.e., we need to homogenise the time-series. This is possible if a priori information on the spectral site, visible spectra from the SCIAMACHY instrument were collected. Inspired by the approach described by Doelling et al., 2012, these spectra were used to determine conversion coefficients that allow adjusting the temporary varying spectral response of Meteosat-2, -3, -4, -5, -6, -7 to the spectral response of Meteosat-5 at launch data (the reference used for the homogenisation). By applying the above conversion coefficients to the harmonised time-series shown in Fig C, the homogenised time-series of BRF over the Algerian site can be obtained (see Fig. D).

Fig D. shows that the homogenised time-series for the Algerian desert looks much more stable in time, and confirms the almost invariant behaviour over the different years. The drawback of the above described homogenisation approach is that it needs to be applied on a pixel-by-pixel basis, allowing correction for the pixel’s unique spectral characteristics.