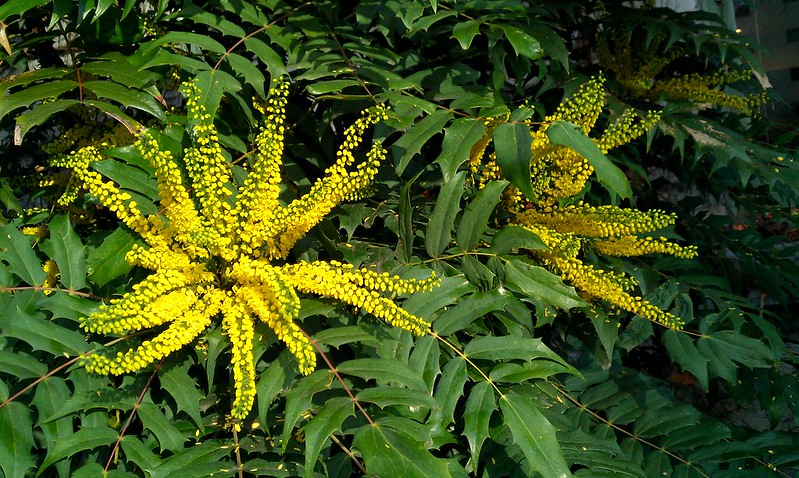 Whenever I think I’m running out of Christmas plants I can be sure that something will intercede to remind me of just how many plants are linked to this time of year in the U.K.  Today, walking across the University campus I caught a sweet honey-like smell and soon tracked down the culprit, Mahonia x media C.D. Brickell.

Having said that, molecular phylogenetic work has suggested that Mahonia could just a subset of Berberis so perhaps I really saw Berberis × hortensis Mabb. (It’s one and the same thing).  There remains debate on the boundaries of the genera Berberis and Mahonia (Yu & Chung, 2017).  For the sake of any gardeners reading this, I will stick to Mahonia.   Whichever name you choose, this plant is a wonderful addition to the winter garden because it flowers from November to December, or sometimes January.

Mahonia x media is a garden hybrid orginating in the Slieve Donard Nursery Company of Newcastle, County Down in Northern Ireland. This nursery operated from 1904-1975 and introduced a huge range of new garden cultivars (Enumerated in the wonderful book by Nelson & Deane, 1993).  In the winter of 1950-51 some seedlings were selected for purchase by Sir Eric Savill from among some 1000 pots of Mahonia lomariifolia (the seed parent of this hybrid and now treated as Berberis oiwakensis (Hayata) Laferr. or Mahonia oiwakensis subsp. lomariifolia) and these were grown on in Savill Gardens, part of Windsor Great Park in Southern England.  The plants turned out to show characteristics of another species, Berberis japonica, especially the frost hardiness of this species (-15C) in contrast with the frost sensitivity of B. lomariifolia (-5 to -10C).  The sweet scent of the seed parent is evident in the hybrids, as is the more upright inflorescence.  the leaves are intermediate between the two, with more leaflets than M. japonica but fewer than M. lomariifolia  One of these was selected and named Mahonia ‘Charity’ and this has become a very widely grown garden plant.  Less commonly grown than ‘Charity’, another of these spontaneous hybrids was raised and selected by Slieve Donard Nursery Company and this has more erect racemes of flowers.  It is more compact than ‘Charity’ and was called ‘Winter Sun’.  It is now very widely grown and enjoyed for its sweet scented winter flowers.

Since this chance hybridization, and the subsequent success of the cultivars selected, there have been deliberate attempts to cross the two species and a cross by Lionel Fortescue of Buckland Monachorum in Devon has yielded at least two widely grown selections: ‘Buckland’, selected by Fortescue, and ‘Lionel Fortescue’ grown and named at Savill Garden (Taylor, 1981).

These winter flowering shrubs produce plenty of nectar and this is a useful source of food for bumblebees (Stelzer et al., 2010). Sadly, what I can’t yet do online is provide the scent of a Mahonia (or Berberis !) so you will just have to venture out and sniff around local gardens.

Nelson, E.C. and Dean, E. (1993). Glory of Donard: A History of the Slieve Donard Nursery, Newcastle, County Down with a catalogue of cultivars. Belfast: Northern Ireland Heritage Gardens Committee.