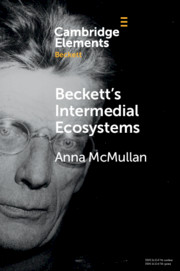 ‘Beckett’s Intermedial Ecosystems’ by Anna McMullan is free to download from Cambridge University Press until 5th February at the following URL:

Part of the Cambridge Elements series, Anna McMullan draws on the concept of ecosystems to investigate selected Beckett works across different media which present worlds where the human does not occupy a privileged place in the order of creation: rather Beckett’s human figures are trapped in a regulated system in which they have little agency. Readers, listeners or viewers are complicit in the operation of techniques of observation inherent to the system, but also reminded of the vulnerability of those subjected to it. Beckett’s work offers new paradigms and practices which reposition the human in relation to space, time and species.