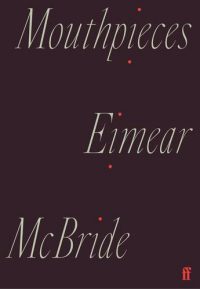 We’re delighted to announce that Eimear McBride's three short, characteristically brilliant texts depicting a fragment of female experience, will be collected in one work, Mouthpieces, and published in February 2021. The works were written during her time as the inaugural fellow at the Samuel Beckett Research Centre with unique access to the Beckett Archive.

Each text is told in Eimear's vivid, original and sharp-witted style. In 'The Adminicle Exists', we hear the inner voice of a woman who saves her troubled, dangerous partner; in 'An Act of Violence', a woman is quizzed about her reaction to a man's death; in 'The Eye Machine', the character 'Eye' tells of her imprisonment, flickering through a slideshow of female stereotypes.

Eimear talks about her work as inaugural Fellow, her thoughts on Samuel Beckett, and the dramas she wrote to be published as Mouthpieces here: