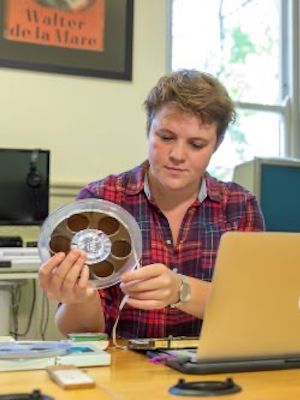 It is well-known that the University’s Special Collections are home to the world’s largest archive for the Nobel-Prize winning writer, Samuel Beckett with over 600 items of original material, including manuscript drafts, notebooks and letters, plus ‘stage files’, book, articles and dissertations. A recent award from the University’s Research Endowment Trust Fund allowed the Samuel Beckett Research Centre team to develop a programme of work by post-doctoral researchers to build a more detailed picture some of the less-used areas of the archive,. This in turn spurred the research team to think about innovative ways to link the archive resources and their ongoing research to new and creative projects with external partners.

Beckett was significantly and variously involved with music, as a practitioner, collaborator, and inspirer of others’ work. As an accomplished pianist, the music of Schubert and Beethoven features in his dramas from early to late, and provides important metaphors and reference-points when he seeks to outline his aesthetics. William Davies has been working to document this aspect of the Beckett Archive and beyond to provide a full and proper account of how Beckett was influenced by and used music in his work. The aim is to encourage contemporary composers to work with the archive and use it to inspire their own creative practice – successfully piloted by Tim Parkinson during his Creative Fellowship in 2018-19.

William discovered that there are in fact over 60 other composers who have produced works influenced by Beckett. These range from famous composers including Philip Glass, Luciano Berio and Elizabeth Lutyens, to less well-known works including Sylvano Bussotti’s Winnie dello sguardo (1978) (a response to Beckett’s drama Happy Days), or Charles Dodge’s Cascando (1978), one of the first uses of synthetic speech generated by computers in music.

Alongside this, Lucy Jeffery has been exploring how best to present some of the ephemeral material online as well as documenting the various sound recordings in the archive. A future development will be to deploy digital technologies to find original ways to re-present key aspects of Beckett’s life in connection to his works. And finally, we have focused on Beckett’s work with the French Resistance during World War Two, creating an online archive and timeline which will be of interest to all engaging with this period in twentieth-century literature.

Our interests in animating the archive as a resource for creative potential has led us to new kinds of partnership. Our Creative Fellows programme has allowed artists in various media to think about Beckett’s creative process as a spur to reviewing aspects of their own practice. The Irish writer Eimear McBride, for instance, worked in Reading on Beckett’s later prose writing, and produced three short plays which have been performed and are to be published in 2021. Learning from the Reading Creative Fellowships programme has inspired colleagues at Trinity College Dublin to formulate their sense of creative potential out of the holdings they hold in their Beckett Centre.

As part of this evolving collaboration we hosted a workshop at which the Dublin writers met with our Creative Fellow Robert McCrum to exchange ideas about working ‘in the aftermath’ of Beckett. We also co-hosted an evening at the Museum of Modern Art in Dublin in January 2020, at which writers invited by the Samuel Beckett Research Centre collaborated with local writers who had been involved with the Trinity programme to present a varied set of readings and recitals and performances.

The combination of activities enabled by the University’s RETF award invigorated various strands of our approach to rethinking how our unique archives might be redeployed, both in terms of establishing new scholarly potential, but also to achieve new national and international reach as a resource that, hopefully, will engage artists in all media and genres into the future.

Professor Steven Matthews is Director of the Samuel Beckett Research Centre. This was one of five research projects which received funding for a pilot phase from the University Research Endowment Fund in January 2019.