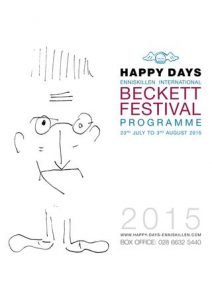 The 4th Happy Days Enniskillen International Beckett Festival took place between 22 July and 2 August 2015. Attended by internationally renowned scholars and theatre practitioners, as well as members of the public, the Festival was a huge success.

Following its positive reception at the April Staging Beckett Conference, Matthew McFrederick, Anna McMullan and Mark Nixon curated an exhibition on "Waiting For Godot at 60" at the Festival. The exhibition contains materials relating to a wide range of productions of Waiting for Godot staged across the UK, Ireland and international platforms. These include productions such as premieres of Godot in Paris (Théâtre de Babylone, 1953), Berlin (Schlosspark, 1953), London (Arts, 1955) and Dublin (Pike, 1955), as well as later productions at the Nottingham Playhouse with Peter O'Toole (in 1971), the Gate Theatre in Dublin (from 1988-2008) directed by Walter Asmus, and more recent performances such as the Theatre Royal Haymarket (in 2009). In what we believe may be an Irish premiere, Samuel Beckett's Production Notebook 2 and Warten auf Godot text for his 1975 Schiller Theater Berlin performance are also on display. Furthermore, the exhibition links itself to Beckett's connections with Enniskillen, as it contains programmes and reviews for performances of Waiting for Godot at Portora Royal School - the school Beckett attended from 1920-1923.

Also at the Festival, Jim Knowlson and Neil Morton (Headmaster at Portora) spoke about Beckett's time at school, the life he led there and the influence it had on him in later years.

Among other events were memorial lectures on Billie Whitelaw (1932 - 2014) by Jim Knowlson and Lisa Dwan, and a number of performances, including an Out of Joint / Happy Days Enniskillen International Beckett Festival Co-Production of All That Fall.