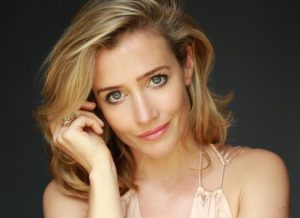 Celebrated Irish actor, Lisa Dwan, mesmerised audiences during two rare and exclusive performances of Not I at the University of Reading as part of its Beckett International Foundation anniversary celebrations, before taking the sell-out production to the Royal Court Theatre in May. Dwan played the role of Mouth in what is one of the most inspiring and challenging pieces in theatre history.

All attendees had the unique chance to see Beckett's original Not I manuscript, which is usually stored in the University's Beckett Collection.

"It was a complete privilege for me to have been invited to perform at the University of Reading. The new Minghella building is a fantastic space. It was incredible to be granted the rare opportunity to view Beckett's original manuscripts and discuss them with some of the world's experts on Beckett."

Not I is a short dramatic monologue (approx. 10 mins) that takes place completely in the dark, illuminated only by a single beam of light which fixes on the actor's mouth above the stage. Everything else is blacked out. The effect is mesmerising and disorientating in equal measure, with some audience members reporting seeing the mouth floating and moving in the pitch black performance space.

It is 40 years since the premiere of Not I at the Royal Court Theatre in London, which featured Beckett's muse, Billie Whitelaw, in a groundbreaking performance. Following the performance, the audience watched a 10 minute documentary film, which featured an interview with Billie Whitelaw. They were then invited to participate in a Q+A session, during which Dwan explained some of the challenges of playing Mouth.

Josh Dugdale, who was in Friday's audience, said:

"A wonderful performance by a brilliant actress. Inspiring, intimate and thought provoking."

"It was a privilege to welcome Lisa Dwan to the University of Reading to perform Not I. This play is rarely staged due to its technical difficulties and the demands it puts on the actress performing the role."

For the BBC report on the production, including an interview with Lisa Dwan, click here.