Dr. James Baxter is delighted to announce the publication of his first full-length monograph, Samuel Beckett’s Legacies in American Fiction, which has been released as part of Palgrave’s series ‘New Interpretations of Beckett in the Twenty First Century.’ 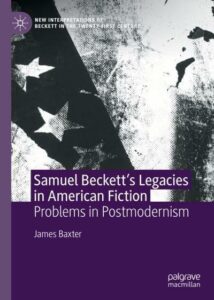 Following Beckett’s only trip to the United States for the haphazard production of 1964’s Film, he would offer the sheepish statement that America was ‘somehow not the right country me.’ This uncertain comment would recall a longer history of  American misfires, exemplified by the 1956 premiere of Waiting for Godot in Miami, Florida in which the play was to be clumsily marketed as ‘the laugh hit of two continents.’

Despite these setbacks, Beckett’s work would inspire an especially vigorous response among American authors in the second half of the 20th century. Building on scholarship concerning the international character of Beckett’s literary legacies, this study provides the most sustained account of his influence over American writing, reading Beckett alongside the works of Robert Coover, Donald Barthelme, Thomas Pynchon, Don DeLillo, Paul Auster and Lydia Davis. In particular, Samuel Beckett’s Legacies argues that Beckett’s fiction of exhaustion and lessness played a galvanising, albeit unlikely role, in shaping the freewheeling postmodern style of American writing. Throughout the book, Beckett’s influence is celebrated, disavowed, and collided with in essays, interviews, and (in true postmodern fashion) negotiated within the space of the literary text itself.

At the same time, this study situates Beckett’s textual legacies alongside the parallel story of his American dissemination, spearheaded by Barney Rosset’s Grove Press. While Rosset’s status as a long-standing champion of Beckett is well known, this book provides a special focus on the Grove in-house magazine Evergreen Review, in which the full range of Beckett’s textual production would be packaged alongside the leading edge of American avant-gardism. Beginning life as a late modernist literary review publishing Beckett alongside the likes of Jean Paul Sartre, Eugene Ionesco, and D.H. Lawrence, Evergreen would rapidly transform into a glossy, commercial production—a bellwether for the pornographic and breezy postmodernism of later decades. Together with the individual author studies that comprise this study, Grove and Evergreen would play decisive roles in transforming Beckett into a ‘postmodern icon.’

In addition to this monograph, Dr. James Baxter has published in Textual Practice and contributed a chapter to the volume Pop Beckett: Intersections with Popular Culture. Forthcoming publications include an article on Beckett, masculinity, and American magazines in the ‘Beckett and Gender’ special issue of Samuel Beckett Today/Aujourd’hui. His current research contends more broadly with modernist legacies in mass market magazine culture.