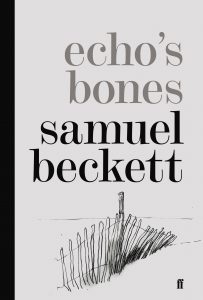 Dr Mark Nixon, one of the world's leading Beckett scholars, has brought to life 'Echo's Bones' 80 years after it was written. The text was commissioned as the final piece for Beckett's early collection of interrelated stories, More Pricks Than Kicks. However the story was rejected as 'a nightmare' by Beckett's editor and was held back from inclusion in the published volume.

Charles Prentice at Chatto & Windus, Beckett's publishers at the time, rejected the tale for being far too difficult and strange. In a letter to Beckett, Prentice wrote: 'It is a nightmare ... It gives me the jim-jams ... Echo's Bones would, I am sure, lose the book a great many readers. People will shudder and be puzzled and confused; and they won't be keen on analysing the shudder.'

Dr Nixon, Director of the Beckett International Foundation and a reader in modern literature at the University of Reading, edited the new volume and wrote its introduction. He said:

'It has been a great privilege to bring 'Echo's Bones' into the public domain. This forgotten text is a vital link in the evolution of Beckett's early work.'

Of Dr Nixon's work, John Sutherland in the Spectator said:

'Mark Nixon's edition is a glorious vindication of scholarship.'

Edward Beckett, nephew of Samuel Beckett, commented to the Observer:

'This is a very important text. It's good that it is available at long last.'

'It is good to have this work, not of genius, but by a genius, finally.'