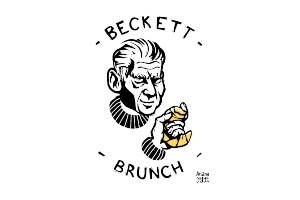 Emma Keanie, a postgraduate researcher in the Department of English at the University of Reading, reviews the Beckett Brunch 2021 that took place last month on the 24th April.

Following its pandemic-induced postponement last year, the 2021 Beckett Brunch, usually held in Paris, took place on Saturday 24th April in that indeterminate Zoom space with Beckett’s own alma mater, Trinity College Dublin, as its base. The bi-lingual event’s theme – ‘Cross-Border Beckett / Beckett par-delà les frontiers’ – having been determined prior to what is now widely recognised as this new era of virtual engagement and remote learning, was a curiously apt topic on which to focus given the new, or at the very least more felt, borders, particularly those arising from the past year’s societal separation, which we must negotiate.

The Brunch was composed of four sessions, each revolving around the concept of borders. Its opening address was a testament to how the writer’s relationship with France and his adoption of Paris as his permanent domicile in 1937 has fostered an equally enduring and convivial relationship between France and Ireland. For we had the pleasure of hearing Patricia O’Brien, Ambassador of Ireland to France, and Vincent Guérend, French Ambassador to Ireland, broadcasting live from their embassies for the especial purpose of opening our following few hours of Beckettian brunching. In this time of distance and separation it was warming to hear Ambassador O’Brien reflect on how Beckett’s legacy has filtered through time as she spoke of how many Irish people, some knowingly and some not, continue to trace his footsteps and settle in Paris, embracing both their own language and culture and that of their adopted home.

Webinar I centred on ‘Beckett Across Research’, comprising the opening address, a stimulating conversation on the notion of borders in Beckett’s oeuvre with William Davies, Trish McTighe, Feargal Whelan and Kathryn White, and Hélène Lecossois’s and Alicia Byrne Keane’s intriguing papers, respectively entitled ‘Samuel Beckett et la politique de l’intérieur’ and ‘The Value of Vagueness: Samuel Beckett, Haruki Murakami and “Universal” References’. White’s invocation of ‘my way is in the sand flowing’ to open the conversation, a pertinent point of reference which elucidates the writer’s own fixation with thresholds, spoke to the event’s focus on the shifting nature of borders, the fact that they are never quite fixed and often show signs of seepage or overlap, and on that unknown, intermedial space which, in ‘Recent Irish Poetry’, Beckett referred to as the ‘space that intervenes’, prefiguring the ‘nomansland’ in his German Diaries. The conversation continued in this vein, expanding on the variant borders at work in Beckett and the world, such as the physical, topographical, social, political, and psychological, this latter element bringing Coleridge’s ‘mental space’ to mind. Davies spoke of Beckett crossing the French border at the advent of, and not forgetting during, the Second World War, and how borders can be imposed and enforced, causing one to confront or question one’s own identity. Even names can delineate borders, as Davies recalled how Beckett’s forename posed a challenge to his identity: ‘how can you not be Jewish?’. He went on to unfold the idea of genre space and how Beckett’s writing crosses genre thresholds, and it was this thought on the borders between different types of writing which resounded throughout the remainder of our rendezvous which is not, of course, dissimilar to the Joycean notion of a ‘poseproem’. Whelan elaborated on the concept of stability as one which does not exist when it comes to transitioning these numerous types of borders, drawing on Beckett’s formative experience of the Easter Rising in 1916, being shipped off to Portora at the age of ten by his worried father, only for a political – not to mention physical – border to be erected on the partitioning of Ireland whilst he was at school, resulting in his living in a different country from his parents. McTighe drew on her (and White’s) fascinating work on ‘festivalisation’ in Northern Ireland to re-channel the genre issue, showing how, for instance, Seán Doran’s ‘Happy Days: Enniskillen International Beckett Festival’ explores the idea of border-hopping Beckett, staging as it does unique productions of his work at once in the north and south of the island. These first four participants engaged in a diverse discussion of how the writer’s sense of place was directly impacted by borders, providing fruit for thought in abundance. Lecossois and Byrne Keane’s papers complemented the conversation, speaking intuitively to notions of borders in the domestic and gender spheres; it is much to my dismay that my fizzling broadband connection could not wait until the interval to begin its experimentation with my patience.

Dúnlaith Bird, founder of the Beckett Brunch, who is to be commended on the creation of such a wonderful and necessary event, opened the second webinar session which focused on ‘Beckett Across Education’ with her paper entitled ‘Étudier Beckett en génie mécanique’. Nicholas Johnson, Gareth Young and Ann Devitt then discussed the topic ‘Teaching Beckett with Virtual Reality’, an insightful exchange of ideas and works in progress which revealed where this past year of remote working and learning has encouraged researchers to go when contemplating what was referred to as a ‘new phase of education’: a frightening concept or not? Both, perhaps. The participants considered the concept of teaching in a ‘v-sense’, discussing how virtual tools create possibilities in education as well as the potential of virtual reality in cultural arenas and the performing arts, and posed the apposite question: why is Beckett considered as opposed to other writers in this intangible space? Well, aside from it being the Beckett Brunch, we must remember that Beckett is, as Johnson put it, an intermedial writer, one whose work itself travelled through media and endured a range of experimentation even before the digital age. This was an illuminating conversation about technological advances, particularly within education, and how the remote experience could become more immersive through advances in the role of embodiment, the presence of the student becoming more real, as it were, within the mise-en-scène of the virtual classroom, a thrilling concept given my own current status as a ‘by distance’ researcher. The speakers explored how we can suspend disbelief about what reality is and what it is not, broaching methods such as visuality, aurality and haptics to enable students to feel the virtual environment in the way they would a ‘normal’ classroom or lecture theatre. Devitt asked the question that surely defines the current, collective preoccupation: what can make us feel like we are here together? Thus the future of learning was explored through concepts which extended beyond blended and responsive learning to considerations of metacognitive functioning and the creation of a smooth interface between reality and virtual reality. These researchers are looking at an experience which infuses a little more viscerality than traditional virtual learning, and Beckett’s mediating function in their discussion reveals a rich, interdisciplinary research field which crosses the borders between literature and technology.

Megane Mazé and Céline Thobois ended Webinar II with a talk on ‘Lectures bilingues de Beckett au-delà de la classe’, during which they spoke about their experience running the Samuel Beckett Reading Group at Trinity College Dublin and the challenges they faced when such groups were forced to move to the virtual space. They reminded us how, as Beckett himself put it in Ohio Impromptu, when working ‘alone together so much [is] shared’, and it was certainly this sense of being together yet fundamentally alone – which Beckett recognised in, for instance, Caspar David Friedrich’s painting, ‘Two Men Observing the Moon’ – which informed their following discussion in the context of the reading group and which also spoke to the larger movement behind the event; how we can be and feel as alone as we possibly ever have been, and how we strive to ‘keep on keeping on’ together. Both described how the reading group brings a diversity of scholarly perspectives to bear on Beckett’s texts, whilst their focus on translation prompted new thought which chimed with the previous panel’s discussion about virtual reality in education and cultural heritage. Thobois astutely observed how we are no longer simply concerned with translation in the sense of the conversion of one language into another, or even of the notion of a work being translated from the page to the stage, as there is now the broader concept of translating a piece of art – like a classroom environment – from, for example, the theatre into a virtual reality. The future mass medium of virtual content was certainly a key theme underpinning the Brunch, and Mazé and Thobois’s discussion of Stimmung or atmosphere contemplated how we could move or adapt a text across the borders of the tangible into the virtual.

Next, we found ourselves in the midst of an at once Beckettian and virtual pause, suspended in the silence of zoom-waiting (for Godot?) before crossing that ineffable threshold into virtual communication. For we encountered some technical difficulty before Clara Simpson’s remarkable performance of Pas Moi / Not I. The organisers negotiated such Beckettian territory with professional ease and good humour, whilst the pause itself allowed us to experience the intervening space between virtual borders, at once evoking and encouraging a new take on Beckett’s assertion that it is the experience and the silence between the phrases which matters. Indeed, in this liminal, static space one could still sense all the numberless goings on which ultimately prevents that unattainable goal described by the Unnamable as ‘the real silence at last’. And then we were transported by Simpson’s sensational embodiment of mouth. In seeking the words to convey the brilliance of her contribution to the event, I was reminded of language’s capacity not to name, for there seems to be no praise high enough. It was fascinating to see Pas Moi / Not I in this on-screen form, as we were not presented with an illumined mouth on a stage but rather with the actress herself. The emotional involvement required for such a successful performance was visible on her face. The mouth, ever the vehicle of emission, was humanised, which is not to say that this text often (or ever) feels to be far from the human experience, it is more that the visual vocabulary of the stage was transformed in the virtual environment. Infrequent sound malfunctions contributed to the overall effect, as the words blurred briefly, morphing for seconds at a time into a series of moans, which only served to complement Mouth’s angst. An ‘Artistic Roundtable’ featuring Simpson, Lynne Parker and Sarah Jane Scaife concluded this third and final webinar centring on ‘Beckett Across Performance’, and these three excellent panellists offered transformative insights into both acting and directing Beckett’s work, the challenges posed by the past year and their perspectives on virtual possibilities in theatre.

Given the focus on the current limitations of virtual engagement, it is significant that the organisers did not fail to create an interactive, if not immersive, experience through their innovative use of tools such as Padlet and video clips. Participants and attendees were able to upload and share their favourite brunch recipes prior to the event, whilst we could also highlight our presence on a virtual map. One need only glance at the map to see how Beckett has crossed cultural and continental borders, touching the lives of many across the globe. We could also upload one-minute video clips, a selection of which were shown at the beginning of Webinars II and III, which ranged from unique research insights and glimpses of an unpublished Beckett letter to gripping experiments in virtual performance. A ‘Borderless Conversation’ with all participants concluded the event, a thoughtful wrap-up technique which enabled a stronger sense of presence and togetherness. Céline Thobois, Megane Mazé, Dúnlaith Bird and Nicholas Johnson’s organisation and execution of the 2021 Beckett Brunch was undoubtedly a great success, setting a standard for future events and igniting interest in research advances between Beckett studies and technology and the future ease of international engagement.