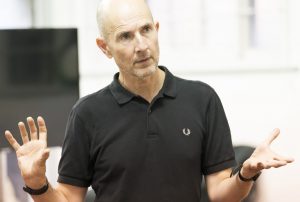 The University of Reading, the Staging Beckett project, and the Beckett International Foundation are delighted to present a conversation with acclaimed theatre director Ian Rickson, who will be talking about the challenges of directing the work of Samuel Beckett and Harold Pinter, with Mark Taylor-Batty, who has written extensively on both playwrights. Ian Rickson directed Pinter in Krapp's Last Tape at the Royal Court Theatre, London, in 2006.

The AHRC-funded Staging Beckett project, a collaboration with the University of Chester and the Victoria and Albert Museum, is developing a database of productions of Beckett's plays in the UK and Ireland which will be available in 2014. This is a pilot for a wider performing arts database.

An exhibition will be open for the evening of the event with materials from diverse productions of Krapp's Last Tape in the UK and Ireland, including Rickson's production with Harold Pinter, and the premiere of the play at the Royal Court Theatre in 1958, starring Patrick Magee, directed by Donald McWhinnie and designed by Jocelyn Herbert. The exhibition will feature items in the University of Reading's collection related to Krapp's Last Tape, and items from the Jocelyn Herbert Archive, housed at Wimbledon College of Art, University of the Arts, London.

Ian Rickson is a renowned theatre director. As Artistic Director at the Royal Court from 1998 to 2006, he directed Krapp's Last Tape, The Winterling, Alice Trilogy, The Sweetest Swing in Baseball, Fallout, The Night Heron, Boy Gets Girl, Mouth to Mouth (also in the West End), Dublin Carol, The Weir (also in the West End and on Broadway), The Lights, Pale Horse and Mojo (also at the Steppenwolf Theatre, Chicago), Ashes & Sand, Some Voices and Killers. His last production for the Royal Court, The Seagull, transferred to Broadway. Other theatre includes Old Times (West End), The River (Royal Court), Hamlet (Young Vic), Jerusalem (Royal Court, West End and Broadway), Betrayal (Comedy Theatre), The Children's Hour (Comedy Theatre), The Hothouse and The Day I Stood Still (NT), Parlour Song (Almeida), Hedda Gabler (Roundabout Theatre, New York), The House of Yes (Gate) and Me & My Friend (Chichester Festival Theatre). Film includes: Fallout, Krapp's Last Tape and The Clear Road Ahead.

Mark Taylor-Batty is Senior Lecturer in Theatre Studies at the Workshop Theatre, School of English, University of Leeds. He is co-author with Juliette Taylor-Batty, of Samuel Beckett's Waiting for Godot and has produced a monograph on Beckett's first director, Roger Blin: Collaborations and Metholodogies (Peter Lang, 2007). He has written extensively on Harold Pinter, including About Pinter (Faber and Faber, 2005) and The Forthcoming Theatre of Harold Pinter (Methuen Drama, 2014). He is an executive member of the International Harold Pinter Society, and a co-editor, with Enoch Brater, of the new 'Methuen Drama Engage' series of monographs on modern drama.