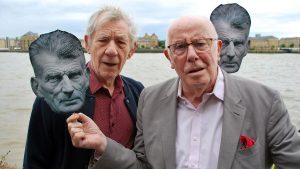 "During our day of filming, Richard was a real gentleman and great company throughout, happily speaking about everything from his interest in Beckett and Sarah Kane to his love of Manchester United. Richard met the University's Vice Chancellor Sir David Bell and followed up on his genuine passion in Beckett's work by viewing many of the Collections theatre materials. He has a long held interest in Beckett's drama beyond his notable TV career, and has performed in Waiting for Godot twice: at the Traverse Theatre in Edinburgh (in 1968) and at the Manchester Royal Exchange (in 1999). He is presently Associate Director at Sheffield Theatres, where he performed in Krapp's Last Tape in the Studio Theatre in June 2014.

"In a lively interview amongst the archival stacks, Richard asked Jim about those first productions ofGodot in Paris and London and Beckett's impact on the theatre more broadly. On one occasion they even reversed the roles as Jim asked Richard about his approach to performing the roles of Vladimir and Krapp. In good spirits, Jim and Richard concluded the interview with their very own double act moment as they read a small section of Vladimir and Estragon's dialogue".

A recording of the programme is available on YouTube, here: https://www.youtube.com/watch?v=4NlOI5Q-ar0