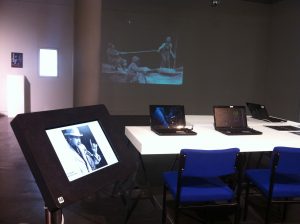 The 3rd and final Staging Beckett Conference took place on 9 - 11 April 2015 at the University of Reading. The conference was well attended and there was a good atmosphere, with speakers presenting on 'Performance and the Archive', 'The Performing Body', 'Sonic Legacies and Radiophonic Echoes', 'Word and Gesture', 'Irish Theatre and Performance Cultures', 'Staging Beckett in International Thatre Cultures', and 'Adaptation, Performance and Intermediality', and keynote lectures by Phillip Zarrilli, Derval Tubridy, and S. E. Gontarski. 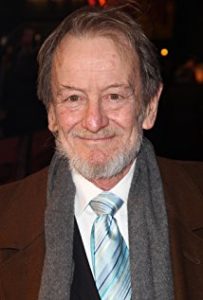 On the final day, we were joined by renowned actor, Ronald Pickup, who starred alongside Billie Whitelaw in Donald McWhinnie's 1977 production of Ghost Trio (supervised by Beckett himself), and as Lucky in Sean Matthias's 2009 production of Waiting for Godot, alongside Patrick Stewart and Ian McKellan. Pickup described his practical and interpretive approach to Beckett's works, as well as reflecting on his time working with Beckett. A transcript of the interview can be found here: https://research.reading.ac.uk/staging-beckett/interview-ronald-pickup/ 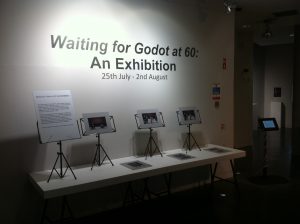 In addition to the conference panels and keynotes there were two interactive events: a performance workshop on The Unnamable and Not I, and a parallel session exploring how archival materials help to generate performance histories.

The conference also marked the launch of the 'Waiting For Godot: 60 Years On' exhibition, the Staging Beckett database, and a limited edition collection of essays, Jim Knowlson's Festschrift, published by the Beckett International Foundation.