The plan of Block 1 (re-named Building 1) emerged clearly from the overlying spreads in 1998 and we were able to trace the lines of the Victorian trenches which had defined and explored its northern range, consisting of a pair of rooms and a linking corridor or verandah. The Victorians had correctly identified the lines of flint and mortar as the foundations for a small stone building which they subsequently explored and recorded. These foundations were examined in some detail in 1998, and were found to consist of shallow trenches filled with gravel, onto which mortared flint foundations were placed. These flint foundations only survived in a few areas. The northern façade appears to be a secondary addition to a more substantially built core to the south. 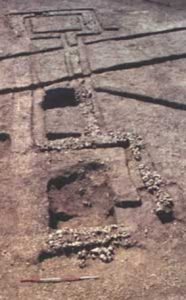 The Victorian excavations of 1893 failed to locate the southern range of Block 1. Although several trenches of this date crossed the line of the foundations of the southern range, the fact that there was probably no mortared flint surviving meant that the Victorians failed to identify the remains of a building here. In fact the recent excavations have revealed the existence of a substantial late Roman building, its presence clearly marked by deep construction trenches, solidly backfilled with gravel.

During 1999 we explored the southern range of this building and excavated its foundation trenches, some of which were up to 1m in depth. They presumably supported substantial stone foundations for a building of at least two storeys. Although the arrangement of its eastern room adjacent to the street is not clear, this building seems to have begun as a 3-roomed unit like the northern early unit of House 1.

The Victorian excavations uncovered Block 1 as the only building aligned to the main north-south road through the insula. This is now known not to be the case with at least 5 buildings revealed as occupying this street frontage, with occupation continuing down to the end of the 4th or into the early 5th century. In particular the Victorian trenches failed to recognise the remains of Building 5 next to Building 1 to the north and constructed in a similar fashion. The northern range of Building 1 was the latest addition to the three-roomed southern range, and was constructed after c.325. The presence of a well and an earlier hearth suggest evidence of earlier occupation. Equally, traces of burnt clay overlying the foundations of the north wall of the southern range of this property indicate a later phase of activity. The Victorian excavations were unable to place the buildings they located within a context, and the simple outlines they recorded belie a much more complicated structural history which the current excavations in Insula IX are beginning to unravel.