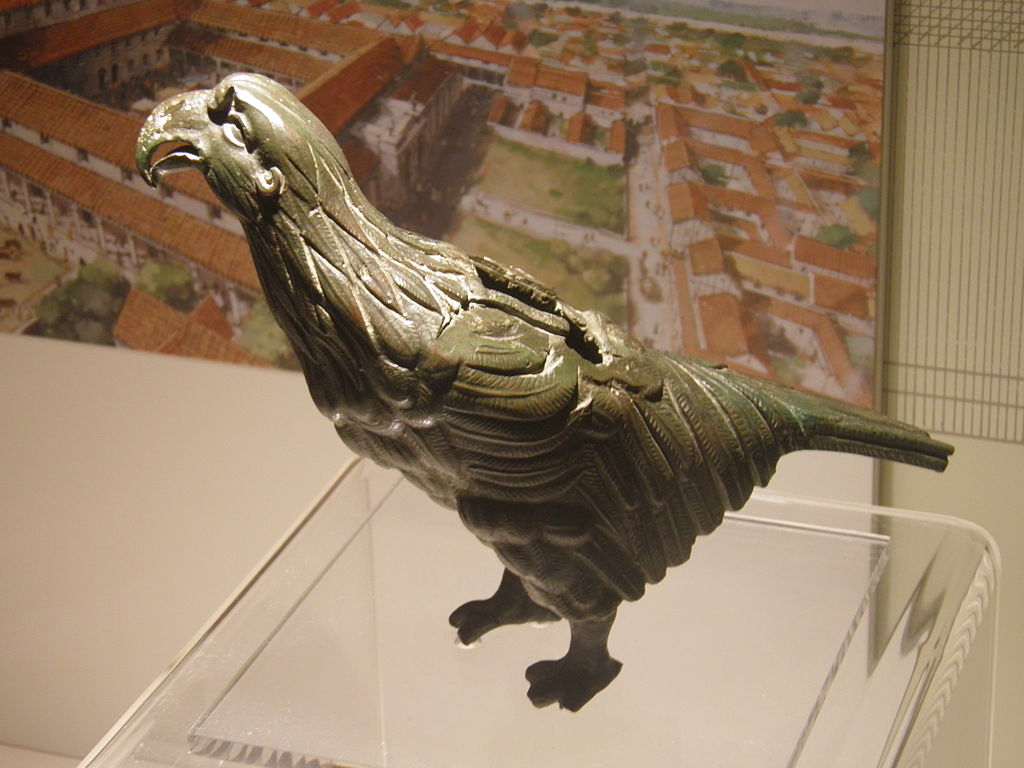 Silchester’s most famous find, the eagle, has been sparking imaginations since its discovery as archaeologists, scholars and authors try to get to the bottom of where the eagle came from and what it was for.

Most recently, the eagle has served as the inspiration for a major Hollywood film, ‘The Eagle’. The film was based in a children’s story, ‘The Eagle of the Ninth’ written by Rosemary Sutcliff in 1954. In the story, the eponymous eagle is the imperial standard of the fearsome Ninth Legion of the Roman army, led by Flavius Aquila. The legion journey north to Caledonia (Scotland) to tame the northern tribes, but never return and the eagle is lost. Twenty years later Marcus Aquila, son af Flavius, sets out to clear his father’s name and discover what happened to the legion and the eagle. The story ends with the eagle being safely returned to Calleva. However, fiction and archaeology tell very different stories of the eagle’s history.

The discovery of the eagle

The eagle was discovered on 0ctober 9 1866 by the Reverend J.G. Joyce during his excavations of Calleva Atrebatum. The eagle was found in the forum basilica, between two layers of burnt material. Joyce believed that the eagle was the imperial standard of a Roman legion and that during a desperate last stand. He imagined that the eagle had been torn off its staff and hidden in the wooden ceiling of the building, where it remained while the forum basilica was burnt to the ground. It was this account that inspired Rosemary Sutcliff’s story and the later film adaptation.

Combining the accumulated knowledge and experience of archaeologists and modern excavation techniques, Professor Michael Fulford (pictured right with the eagle) re-examined the forum basilica. His findings suggest that Reverend Joyce misread the archaeology and that the layers of burnt material originate from the initial construction of the building and its later use for metalworking. It is now thought that the eagle itself was part of a larger statue, perhaps of the god Jupiter or an emperor, and dates from the early first century AD. It was incorporated into the foundations of the forum basilica in the early second century AD, remaining buried throughout the town’s later history until it was rediscovered by the Reverend Joyce.

Silchester’s finds expert Dr Emma Durham wrote a paper on the eagle in 2013 discussing its form and manufacture, accompanied by a selection of great photographs. Professor Mike Fulford also also adds context to the discovery of the find and it’s symbolic significance. You can read the full paper here

The eagle is kept at Reading Museum. More information here