The excavations at Silchester uncover a large number of finds every season. In 1866 an eagle figure was found in the forum basilica, between two layers of burnt material. Read about the eagle and the book and film it inspired. 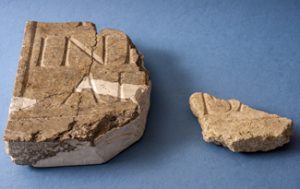 A fragment of a Purbeck Marble inscription with the surviving letters ‘ba’ was discovered from the backfill of Victorian trenching in Insula III. The piece matches with a fragment of stone with the letters ‘At’, found at Silchester in 1891. Together these read At(re)ba(tum) – ‘of the Atrebates’ – the French tribe who probably founded Silchester in 1st Century BC. The inscription would have decorated a monumental building, destroyed in the mid-to-late 1st century AD.

Read the press release on the discovery of the inscription 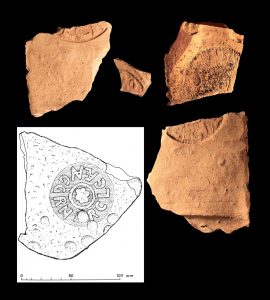 Four fragments of Nero tiles have been found from Insula III. These tiles are found nowhere else in Britain, and suggest imperial involvement in construction at Silchester. The discovery of these finds within Insula III led to the instigation of the Nero at Silchester Project – to look for further evidence of the emperor’s influence at Calleva. Excavations at the Silchester temple site and Little London kilns uncovered a further six Nero stamped tiles

Harpocrates was the Roman god of silence and secrecy. Images of Harpocrates are very rare in Britain, with fewer than ten having been discovered.

This example is made from copper alloy in Campania, Italy some time in the early first century. It would have formed the foot of a circular household vessel – probably a food or drink warmer.

Read The Guardian’s coverage of the discovery of the figure.

This folding knife or razor is a unique find – nothing like it has been found anywhere else in  the Roman world.

The handle, which depicts two dogs mating, was carved in exquisite detail from elephant ivory some time in the second century. It is thought to have been made in Germany, France or Italy and would have been a valuable possession. The knife may have been deliberately buried  as a ritual.

These sets are common across the Roman Empire. Comprising a small scoop for cleaning the ears, a nail cleaner and tweezers, they would have been used by men and women during their daily hygiene routine.

With a scalpel at one end and a blunt dissector at the other for parting and moving tissues without cutting, this instrument would have been one of many surgical tools used by a Roman doctor.

Many new surgical instruments and practices were developed during the Roman era and doctors and surgeons were often experts in their field and would have undertaken a wide variety of procedures, including cosmetic surgery! This scalpel is very similar to examples found at sites in Roman Italy.

This carved gem or intaglio is made from the semi-precious gemstone carnelian, which was used widely during Roman times to make engraved gems such as this. It would have sat in a signet or seal ring used for imprinting a wax seal on documents. The images are very neatly and precisely cut, suggesting it was made in the first century which has been confirmed by the date of the pit in which it was found.

The carved image is of the Roman goddess Minerva who faces left, holding a spear and a shield. Behind her is a serpent. Despite her warlike appearance, Minerva was chiefly a goddess of the domestic arts and of healing, but In Britain she was often linked with local sky and healing deities, such as Sulis Minerva at the Sacred Spring at Bath.

This is pottery mortarium would have been used with a pestle for grinding and pounding foods. There are makers stamps either side of the spout which read ‘MATVGE FECIT’, which means ‘Matugenus made it’. Matugenus lived and worked in Verulamium, just outside modern day St Albans, between AD80 and 125. He was probably the son of ALBINVS, who was a prolific producer of mortaria and whose wares are found across Britain, including at Silchester.

Iron Age silver minim of Verica, king of the Atrebates tribe, who ruled out of Calleva in the first half of the first century AD. This coin is very small at just 8mm across. Verica’s flight to the court of the Emperor Claudius provided one of the pretexts for the Roman invasion of Britain in AD 43. The ‘CF’ on the back of the coin stands for Commii Filius, Latin for ‘son of Commius’. Commius was the first king of the Atrebates.

Jug handle in the form of a
human leg

This jug or flagon handle is made of copper alloy and is cast in the shape of a perfectly formed leg and foot, with clearly detailed toes and toe nails present. The top of the handle is decorated with leaves, and the thumb rest is in the shape of a curled leaf. The alloy contains a small amount of lead, which would have made the molten metal easier to pour allowing such clear detail, demonstrating the skill of the maker.

This is only the fourth example of this type of jug to be found in Britain and would have belonged to a wealthy household in the town. It was probably made in Gaul (modern-day France).

Hairpin in the form of a hand plucking a fruit

Dating from the first or second century, this hairpin is highly stylised and would have been owned by a woman of relatively high status. It depicts a right hand picking a piece of fruit (possibly a pomegranate) and has three rings around the top of the shaft, which may represent bracelets.

This clasp would have been used to secure a sword belt or ‘baldric’ that was worn over one shoulder and passed diagonally across the chest. It is likely to have been worn by a Roman solider at the time of the Roman conquest of Britain.

A complete bone awl; probably made from the tibia of a sheep or goat. This awl would probably have been used to punch holes in leather or cloth and its highly polished surface suggests that it was well used. Leather working was one of the many industries that took place at Calleva during the Iron Age.

This brooch or ‘fibula’ would have been worn by men and women to fasten clothes, such as cloaks and is the ancestor of the safety pin we have today. It is made of copper alloy and is decorated with mouldings and coated with tin. The brooch is in the ‘Hod Hill’ style, named after the early Roman fort in Dorset where many of these have been found. This type of brooch may therefore have been the style preferred by Roman soldiers.

This is a die made of bone found during the 2006 excavations. Dice games were popular during the Roman period and such finds are common in Roman settlements.

Like modern dice, the opposite sides add up to seven.

The faces of this die are quite worn, suggesting that it was well used.

This is an As – the lowest denomination coin that was frequently minted during the time of the Roman Empire. It is made of copper and was minted in Lyon, Southern France between AD66-69.

The coin features Nero, who was emperor of Rome from AD54 to AD68, during the early development of Calleva Atrebatum as a Roman centre.