By means of a number of our excavations, beginning with those at Insula III in 2013, we are investigating evidence for the building project of the Emperor Nero (AD54-68) at Roman Silchester. Our work in Insula IX between 1997 and 2014 had thrown up tantalising evidence for this in the form of high quality building stone incorporated into the foundations of Roman buildings as early as the late 1st century AD, as well as ceramic bricks and tiles stamped with Nero’s name and titles. Silchester is unique among the towns of Roman Britain for an imperial-sponsored building project associated with this emperor. While the excavations at Insula III have found yet more Nero tiles and evidence of an unfinished early Roman house of late 1st/early 2nd century date, any building that could be as early as the reign of Nero remains elusive.

Following up on the discovery in the 1920s of a Nero tile at Little London, about a mile south of the Roman town, recent geophysical survey by Historic England indicates that this was indeed the site of (brick) kilns. A large scale excavation here in the summer of 2017 uncovered a concentration of tile kilns, the largest of which contained two Nero stamped tiles amongst a number of other high-status forms of ceramic.

There is strong circumstantial evidence, including the find close by in 1903-4 of a Nero tile, to suggest that the public baths in Insula XXXIIIA in the south-east of the Roman town are early in the town’s development. Excavation to test this will take place in the summer of 2018. 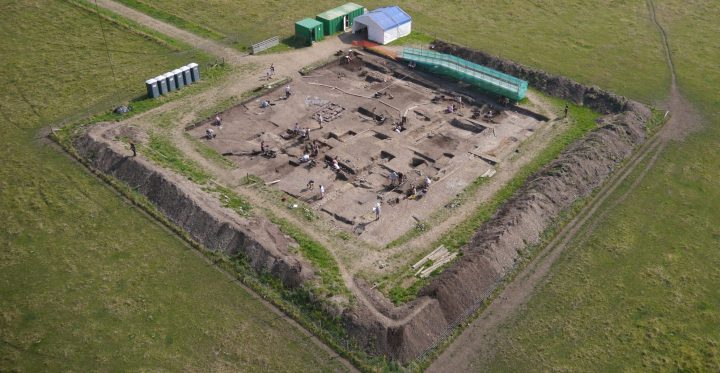 The Society of Antiquaries’ excavations at Silchester (1890-1909) defined 37 insulae (Latin for islands) or blocks within the walled town. Previously, modern excavations within the walls have re-examined parts of Insula IV (forum basilica and possible church) and Insula IX (domestic housing) as well as the defences themselves and some of their gates. Outside the walls the amphitheatre has been excavated. Insula III is located towards the centre of the Roman town, immediately to the west of the forum basilica.

During the excavations in Insula IX (1997-2014), quantities of fine architectural stone and other building materials, including imported marble and Purbeck Marble, were found re-used in the foundations of timber buildings as well as in rubbish deposits elsewhere, all dating to the late 1st/early 2nd century AD. The inference of these finds is that there were high status buildings which had been both built and demolished before the turn of the 1st and 2nd century. Building of such quality within any town of Roman Britain dating to the 1st century AD is exceptional. What building(s) had they been taken from? Where might such building(s) be located?

One clue was offered by the Victorian excavation of Insula III in 1891 where the remains of a possible bath house were discovered in its south-east corner. The excavators were not confident of their interpretation and the description of their findings suggested that these and other building remains were found at some depth, so indicating a possible early date for them.

In 2013-14 we re-examined the possible bath house and found the remains were indeed early Roman, though no earlier than the late 1st century AD. They had been dug into ground previously made up and consolidated with clay, gravel and other material. The foundations did not, however, belong to a bath house, but to a large town house fronted by a colonnade whose footprint, we found, appeared to extend beyond the limits of our trench.

These remains were distinct from a later phases of occupation which comprised the very fragmentary remains of late Roman masonry-founded buildings fronting on to the two streets, rubbish pits, an enigmatic hypocaust structure associated with a stone-lined drain, and a hearth of reused tile.

The discovery that the remains in the south-east corner of the insula were of a grand, early Roman town house raised the question how much further they might extend to the north and west beyond the area we had opened in 2013-14. Was there a comprehensive plan for the initial development of Insula III? The 2015 excavation, along with that planned for 2016, aimed to discover how far the remains extended across the insula (block). 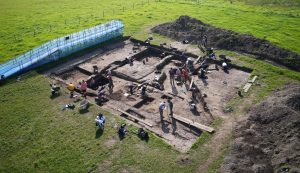 No trace was found either of the N-S aligned foundation or of any early Roman masonry structure. However, important insights were gained into the early development of this part of the insula. Commercial properties fronting on to the main north-south street and dating from the late 1st/early 2nd century included a bakery or food outlet, represented by the ‘hypocaust’ discovered in 1891, which proved to be the remains of a key-hole-shaped, brick-built oven, and a blacksmiths shop associated with extensive waste from iron smithing.

From the late 3rd century the remains of flint foundations along the east-west frontage indicated support for at least one timber-framed building in the north-east corner.

The fourth and final season of excavation in Insula III was undertaken in summer 2016. In light of the negative evidence for the continuation of our early Roman house up to the north-east corner of the block, we complemented our planned trench in the north-west corner of the insula with two small trenches adjacent to the area opened in 2013-14.

Although the 2016 trench in the north-west corner produced plenty of evidence for the making up and consolidation of the underlying ground, similar to what had been found in the south-east corner, no trace was found of any early Roman masonry structure. However, evidence was recovered of late Roman occupation, including of a rectangular building, 15m by 7m, of timber-framed construction built on gravel-filled construction trenches.

To the south-east, the two trenches designed to seek evidence of the extension to the north (trench 2) and west (trench 3) of the early Roman colonnaded town house proved negative. However the western trench allowed the remains marked on the 1891 plan to be disentangled so that a late Roman cottage, its narrow front facing on to the east-west street, could be detached from the early foundations to the east.

We conclude that, despite the effort invested in making up and consolidating the ground punctured by the pits and wells of the late Iron Age and earliest Roman occupation, attempts to build in masonry in Insula III in the late 1st century were abandoned, including the south-east building. By the late 3rd and 4th century the ground was stable enough to take the load of several timber-framed buildings constructed on gravel foundations or flint footings.

We gratefully thank the Headley Trust and Silchester Friends for their support of this project.

Tiles stamped with the name of the Roman emperor Nero (AD 54-68) have been found at several sites within Roman Silchester, providing tantalizing evidence for imperial involvement in construction at Silchester within 25 years of the initial Roman invasion of AD 43.

In 2017 we excavated the Little London Tile Kiln site, a little over a mile south-west of the Roman town, to learn about the production of these tiles.

The site was investigated during the 1920s by Lt. Col. Karslake and volunteers, who observed numerous fragments of Roman bricks and tiles following ploughing at the site. He dug a series of trenches, recovering further ceramic building material, including wasters and a tile with “a round stamp in the centre with the legend NER. CL. CAE. AVG. GR., of much the same form but not identical with the stamp with the same legend which was discovered in 1903-4 in a deep latrine pit adjacent to the baths at CALLEVA”. In full the legend reads ‘Nero Claudius Caesar Augustus Germanicus’.

Geophysical survey by Historic England revealed a large quarry pit (used up until the 1960s) with a number  we will be excavating two trenches. Trench 1, in the south of the site, will investigate one possible kiln and trackway. Trench 2, in the south-east of the field, will be investigating another possible kiln in the area where the Nero tile was recovered.

Geophysical survey, undertaken in 2016, identified what appears to be a third Romano-Celtic temple on a north-south alignment with the other two, as well as further evidence of the course of the boundary wall of the sacred precinct (temenos).

In 2017 we will be excavating part of the ‘new’ temple and its immediate environs with an open-area trench within the grounds of The Old Manor House. We hope to establish the chronology of the temple structure and the temple precinct and recover evidence for ritual and religious activity. See our blog for more details but we anticipate that the excavations will run from 9th August to 5thSeptember 2017, every day except Sundays and will be open to the public, 10am-4.30pm, with an open day on 26th August. The site is only accessible from the footpath which runs between St Mary’s Church and the Droveway. 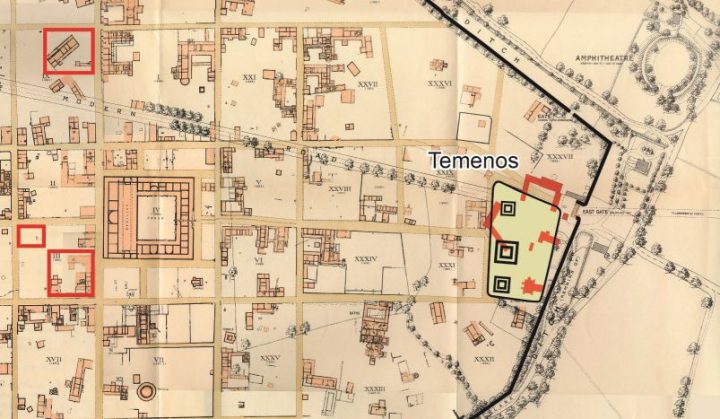 We warmly thank Mr and Mrs West for permission to excavate and to them and Silchester Friends for their financial support of the project.

We also thank David Wilkinson, Assistant Inspector, Historic England for his help in advising on our application to DCMS for Scheduled Monument Consent.

There is strong circumstantial evidence, including the find close by in 1903-4 of a Nero tile, to suggest that the public baths in Insula XXXIIIA in the south-east of the Roman town are early in the town’s development. Excavation to test this took place in the summer of 2018 and 2019. Find out more here