City of the Client Kingdom

The Town Life project was an 18 year excavation of one block of the Silchester Roman Town by the Department of Archaeology at the University of Reading. Established in 1997, the project was both a training Field School and a research excavation located in a major Roman civitas capital (administrative centre), situated in the parish of Silchester, in the county of Hampshire (England).

This excavated block is called Insula IX and was chosen from all the other insulae by a number of factors. Recent aerial photography and geophysical survey had shown that more buildings existed here than had been originally identified by the Victorian excavators in 1893.

A large building of flint foundations had been discovered by the Victorians but it's alignment was asymmetrical to the street grid perhaps suggesting this was an earlier structure of Iron Age date.

There were also apparently 'blank' areas, where neither the excavation of 1893 nor subsequent aerial survey had revealed structural remains. Our excavation offers the opportunity to see if these 'blank' areas contained timber buildings.

Large scale excavations were carried out over 20 years (1890-1909) by the Society of Antiquaries of London. Their achievement was to excavate the whole of the Roman Town within the walls, resulting in the now familiar plan of Silchester.

More about the Victorian excavations 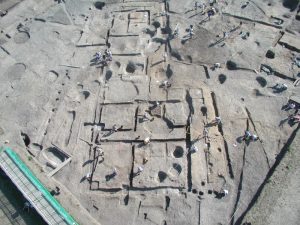