In 1893, the fourth year of the Society of Antiquaries' programme of excavations to explore the entire walled area of the Roman town of Silchester, the northern part of insula IX was excavated. In the course of revealing the plan of the large town house, House 1, 'a shallow well of the usual construction, about 8 feet deep' was found which cut through the line of the external wall of the west end of the southern corridor (now numbered 1745/1743).

'In it, about 5 or 6 feet from the surface, lay, point downwards, the fragment of the sandstone pillar with the Ogam inscription'. 'Beneath the stone, and completely flattened by it, lay a vessel of peculiar form, of white metal or pewter; but no other objects of interest were brought up, and it was evident that the well was disused and partly filled up when this vessel, and the stele which crushed it, had been flung into it'. The excavators correctly observed that the well was secondary to the house and 'could only have been sunk…..somewhat late in the Roman period'.

The significance of the find as an isolated example of ogham some distance from the main British distribution in Devon and Cornwall and west of the River Severn was certainly appreciated at the time of the discovery. The stone and its inscription were reported on separately from the account of the excavation itself by Sir John Rhys in the year of the discovery. His reading, EBICATO[S]/[MAQ]I MUCO[I--], 'of Ebicatus, son of the tribe of', has been accepted up to now. The inscription has been interpreted as an epitaph and it has been variously dated to the fifth and sixth centuries. 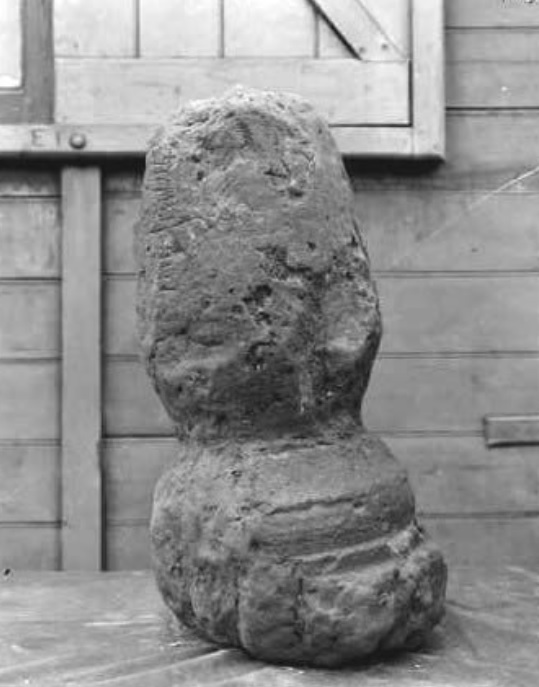 In 1998 the well (1170) which contained the ogham stone was re-examined. It was cut through the remains of House 1 and its fill consisted of large quantities of flint and ceramic building material. It is a fair assumption that the original excavators backfilled the well with more or less the same material that was originally excavated.

When completely excavated the pit measured c. 3m in diameter and 2.65m in depth from the Roman floor surface of House 1. The modern water table was encountered at a depth of about 2.2m. The depth measurement of 2.65m (= 8 feet 10 inches) compares with the two figures of 8 feet and 'nine feet from the present level' from the accounts of the 1893 excavation.

Removal of the Victorian backfill within 1170 during the 1998 season revealed, at the very bottom of the well, two pieces of poorly preserved oak. The deposit associated with the wood appeared not to have been disturbed by the Victorian excavators. The two fragments of wood have now been subjected to AMS radiocarbon dating with the following results: 1630 +/- 45BP (OxA 8570) and 1780 +/- 40BP (OxA 8626). The latter calibrates to AD 130-380 at two standard deviations; the former to AD 320-540. At one standard deviation the younger date calibrates between AD360 and 530. This date indicates a mid-fourth to fifth century terminus post quem for the filling of the well and the presence of the slightly older piece of wood might suggest an earlier date within that range, say, nearer 400 than 500.

The pewter vessel mentioned in the account of the 1893 excavation survives in the Silchester Collection in Reading Museum. It is a simple, biconical flagon similar to a few other examples found in southern Britain which can be dated broadly to the fourth and no earlier than the late third century. The body of the vessel has clearly been deliberately pierced.

The occurrence of deliberately pierced pottery vessels can now be paralleled more widely among the complete examples recovered from the 1890-1909 excavations and now conserved in the Silchester Collection at Reading Museum. These vessels range in date from the first to the fourth century AD. Although the precise provenance of individual pots can seldom be established, it is clear from the accounts of the excavations published passim in Archaeologia between 1890 and 1910 that it was the excavation of pits and wells which produced these specimens. We would suggest that the act of depositing a vessel once capable of holding water was a non-returnable gift to the gods to ensure the availability of water from the freshly dug pit.

The inscription as a whole has now been read by Dr. Mark Handley as TEBICATO[S] / [MAQ]I MUCO[I--]. This can be translated as (The something) of Tebicatus, son of the tribe of N. The reason for the 'something' is that the name, as was usual, is in the genitive case, implying ownership. The missing word is usually taken to be 'memorial' or 'stone', but 'land' is also possible given that in an Irish context ogham inscriptions were used to denote familial title to land. The context of the Silchester Ogham Stone has recently been re-examined and reported on (Medieval Archaeology 44 (2000), 1-23).

The remains of the dwarf column inscribed with ogham were deposited in a shallow, but functioning well in the later fourth or fifth century. The ritual associated with the commissioning of the well can be related to long-established practice in the Roman town. The burial of the stone certainly closed this well and, in the absence of evidence for a successor, this event may be associated with the end of occupation of Buildings 1 and 5 to the east and similar buildings to the west.

While Building 1 as a whole has a late third/early fourth century terminus post quem, make-up from the eastern projecting room suggests a date for construction of the northern range after about 325. It is quite possible for a series of dwarf columns to have supported a lean-to roof over this corridor. Thus the column could have originated from this building. In this context the stone could have been carved while it was in situ in which case the missing word at the beginning of the inscription could have been 'land' [of Tebicatus].

The stone may therefore have been inscribed to mark the ownership of a town-house (and associated property) by an immigrant from Ireland sometime in the fourth or early fifth century and, arguably, after c 325. Its final deposition in the well 1170 served to neutralise the use of a nearby well as a source of water. The terminus post quem for the filling of the well in the late fourth or fifth century offers furthers support for an early date for the development of ogham.