The evidence suggests that, by the middle of the first century AD, the irregularly planned city was transformed by the laying out of a regular street grid which divided the settlement into a series of rectangular blocks (insulae) which had little or no regard to the pre-existing arrangment. From this time onwards new properties were constructed which co-ordinated with the streets and there was a move towards focussing commercial activity along the principal streets. At the same time some of the old properties, including our House 1, continued to develop in their original positions.

Shops and Workshops in Insula IX

Within Insula IX, the effect of the laying out of the streets was to encourage the development of shops and workshops along the main east-west street and, within our area, of similar properties running up the north-south street from the central crossroads. House 1 was rebuilt as a timber-framed, aisled hall (shown in the reconstruction image above) resting on stone foundations, one end of which was devoted to metal working, ranging from iron-forging to the working of gold. By the late second century, two timber-framed buildings, probably shops or workshops, and associated with at least two wells, had developed along the north-south street in the south-east of the excavation area.

By this time, and following the break-up of the kingdom of Cogidubnus, Calleva had become responsible for the administration of a county-sized area, the territory of the Atrebates, corresponding approximately with the historic county of Berkshire. 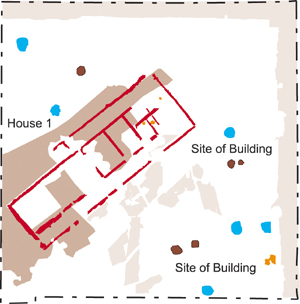 Wood does not normally survive on archaeological sites, but can be preserved in arid or waterlogged conditions. Dan Miles has looked at timbers used to line wells, like this one in the photo, cut deep into the gravelly soil. Timber can be used for dating (dendrochronology and radiocarbon dating) but also tells us about woodworking and construction techniques. 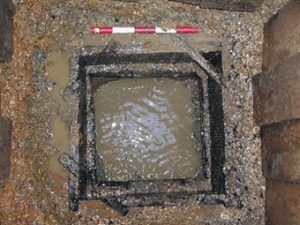 A small pierced jar was found in the very early well above. The well sides clearly show even earlier archaeological layers.

Analysis of soil samples by Adam Wojcik has detected globules of gold, seen here under an electron microscope. This sample was associated with a cupellation hearth in House 1. Cupellation is a metal working process whereby scrap gold and silver can be purified or silver extracted from native lead and it would have been common practice in the Roman period. 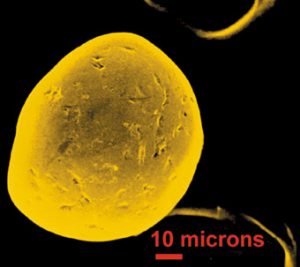