City of the Client Kingdom

A striking feature of the excavation area is the positioning of the large House 1 which lies diagonally across the insula, against the grain of the streets, two of which bound the area of the excavation to the north and the east.

From our first six years' study, it is clear that it has a complex history. Starting life no later than about the mid-first century AD as a timber-framed house of at least three rooms, the house develops in the later first century into two town-houses of masonry construction.The two town houses were then linked to create one large town-house, some 37m in length. All of these developments perpetuate the same, pre-Roman alignment.

Traces of at least three other buildings on orientations either similar to, or approximately at right angles to our town-house have been so far discovered within the excavation area. 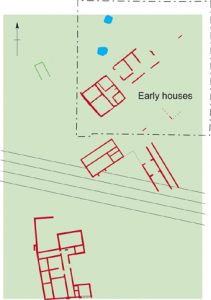 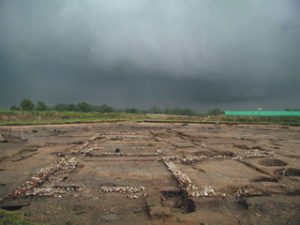 In studying the plan of the town recovered by the Victorian and Edwardian excavators, we can identify many other buildings which apparently share orientations different to, and, in all probability, dates earlier than, the Roman street grid. Among these we can include the amphitheatre, the town baths and several temples. Occupying much of the area within the later town-walls, these buildings belong to a time in the first century AD when Calleva probably lay within the semi-autonomous 'client kingdom' of Cogidubnus. Together, they constitute the first Roman city of Calleva.

Pottery is one of the most abundant finds on Roman sites. Jane Timby identifies our pottery and this helps date the features on site and, from the distribution of different types of pot (eg tableware, cooking or storage vessels), gives a clue to activities taking place in different rooms. Pottery can also tell us about trade links between Silchester and other parts of the Roman Empire. In several cases whole pots were deposited in wells as a ritual act. Sometimes these were deliberately pierced. Whole pots were also buried in two different corners of one of the rooms in House 1. 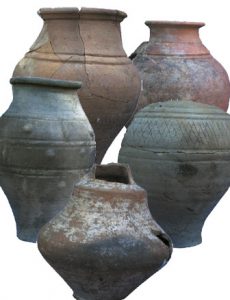