The 55m by 55m area chosen for our excavations in the north-east of Insula IX had been found by the Victorians to contain the remains of two stone buildings: the diagonal building (House 1) and Block 1 (our Building 1). During the initial phase of Victorian exploration of the insula during 1893, the siting of long trenches extending north-westwards and north-eastwards from the hedge lining the modern drove-way would have identified the stone foundations of these two buildings. Subsequently their outline and plan would have been ascertained by following these foundations. As a final act of exploration, trenches would then have been extended outwards from the known foundations of these buildings to confirm their extent and to check for further buildings. Since 1997 our excavations have been able to clarify the date and developing plan of these buildings.

House 1 lies diagonally to the orientation of the insula and occupies an area of 15.6m by 37m. The Victorian plan shows one large building, with foundations all recorded as contemporary, divided up into 6 rooms of varying size, and two flanking corridors. Room 3, in the centre of the building is floored with packed, flint cobbles through which are cut at least three pits. The walls here are built of well-coursed flint and, like the flint floor, there are some traces of mortar. One wall (1015) extends some way to enclose Room 1 to the north-east, but thereafter its remains appear to be at least partially robbed out. Traces of a tesselated floor resting on gravel make-up survive in the east corner of Room 2. 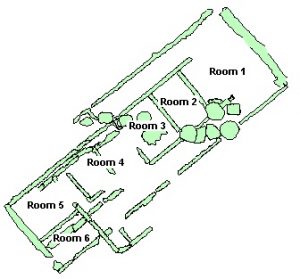 As for Room 1, the Victorians assumed it continued as far as the end wall to the north-east (1553). In fact the indications from the current programme of excavations are that this is not so and that the original excavators failed to recognise the robber trench for the north wall to Room 1. We now know that Room 1 was originally of similar proportions to Rooms 2 and 3. Unlike the tesselated floor of Room 2, Rooms 4, 5 and 6 revealed traces of surfaces of crushed tile, perhaps as a form of opus signinum, pressed into the underlying makeup. 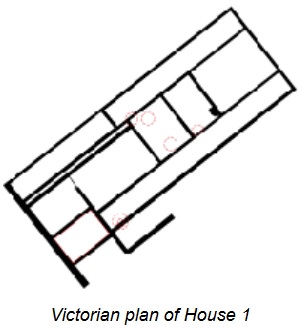 There is no indication from the Victorian plan that House 1 was a building with a complicated structural history and several phases of development. Our excavations to date have proven this to be the case, with evidence for differing builds and earlier wall-lines. For example, the continuation south-westwards of the north-west wall (1184/1154/1151) of Room 3. Although the exact nature of the relationship has yet to be defined, the continuation is of a poorer build which makes use of flint and reused tile fragments. The material is not well-coursed and there are no traces of mortar. The return (1150) which forms the south-western end wall is similarly constructed although there are traces of a clay layer into which the lowest course of flint and tile is bedded. While the north-west and north-east walls of Room 6 (1157, 1163) show evidence of better coursing, the south-east and south-west walls (1156, 1187) are poorly preserved and clearly cut by later features. The line of the south-east wall of this room continues north-eastwards as a weakly structured feature of unmortared flint and reused tile fragments (1745), seldom more than 0.4m in width. The build of this feature appears to become weaker at its north-east end (1174) where it returns to form the north-eastern wall of the building (1553). On the north-western side (1165) it has not been traced more than halfway along the length of the building where it turns (1664) to meet the north-western wall of Room 4. It apparently continues to the south-west, but its extent cannot be traced. Puzzling features of the outer wall (1553) are the relative depth of its surviving remains and the insubstantial nature of its structure. There is no reason to suppose that its surviving character is very different from what was found in 1893. Since it is not sufficiently robust to have taken much of a load, we can only presume that, like the walls forming the southern end of the building, it carried a timber-frame superstructure. Why the foundations should have been laid at such a depth when their load-bearing requirement was limited remains unclear. If it were not for the common alignment with the south-west wall of Rooms 5 and 6, the depth and structure of the wall would suggest that this wall belonged to a later phase.

House 1 now has a mid-to-late 3rd century terminus ante quem for its abandonment and robbing, while its earliest phases are likely to belong to the first century AD, if not the late first century BC. The radiocarbon dates of the complete dog skeleton recovered in 1998 from a pit cut through its foundations give a combined calibrated date of AD 130-260 or AD 280-320 at 95% confidence. This gives confirmation to the mid-to-late third century date derived from the coins and pottery also recovered from the pit.