So now it’s time to dig, but how do archaeologists know what to dig first, and what can we do to make sure that everybody in the team is working towards the same goals? First let’s take a look at how we record what we dig and the different types of archaeological site we might encounter

Archaeologists use a simple way of detailing what they do on site called the Single Context Recording system. Using this we break each site down into the smallest possible units – contexts. Each context represents a single event that happened in the past, be it something huge like the construction of a wall, or seemingly insignificant like throwing the ash from a fireplace into a rubbish pit. Each of these events can be defined as a single context by looking at the differences in the soil – the colour, consistency, texture and what inclusions it may contain, and deciding that it is different to the context next to it. Contexts such as walls, dumps of rubbish, floors, surfaces, demolition layers etc are all positive contexts, but we also need to recognise negative contexts, an event in the past where somebody has removed something such as digging a pit or cutting into a floor.

Each context we define is given a number from a sequential register on site. This means it is unique and all finds from that deposit will then be associated with that context only. That context will then be written about on a context sheet with all its characteristics defined, and also drawn either as a plan or on a cross-section.

Perhaps most importantly each context must be related to what is directly earlier and later than it. This chronological, or stratigraphic, relationship can be used to to build a matrix – a visual framework that shows the relationship between all contexts in a trench and is the basis for understanding the story of any site

Archaeological sites can broadly be divided into two categories that are loosely defined as ‘rural’ or ‘urban’, with the majority of sites dug in Britain classed as rural.

A rural site is usually less complex than an urban site and in most cases a smaller percentage of the archaeological features can be dug but will still give a full understanding of what is going on. This example from Hertfordshire shows a trench where the topsoil and subsoil has been removed with a mechanical excavator. The darker areas are archaeological features whereas the larger, light-coloured areas are the undisturbed natural geology – in this instance clay 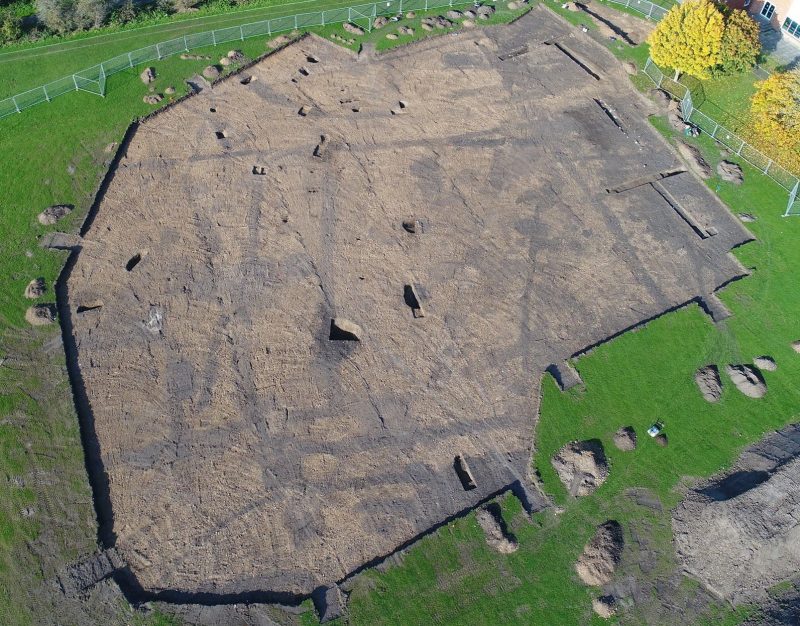 With an example like this it is not necessary to fully excavate every archaeological feature, and in most cases this would not be possible due to time and financial restrictions anyway. So once the trench has been trowelled, decisions can be made about where to put strategic slots through the features so as to try and understand how they relate and also to retrieve finds for dating. For instance, if there was a large ditch than ran for 30m through your trench, you may decide to only dig 10% of it, therefore putting a 1m-wide through it every 10m. 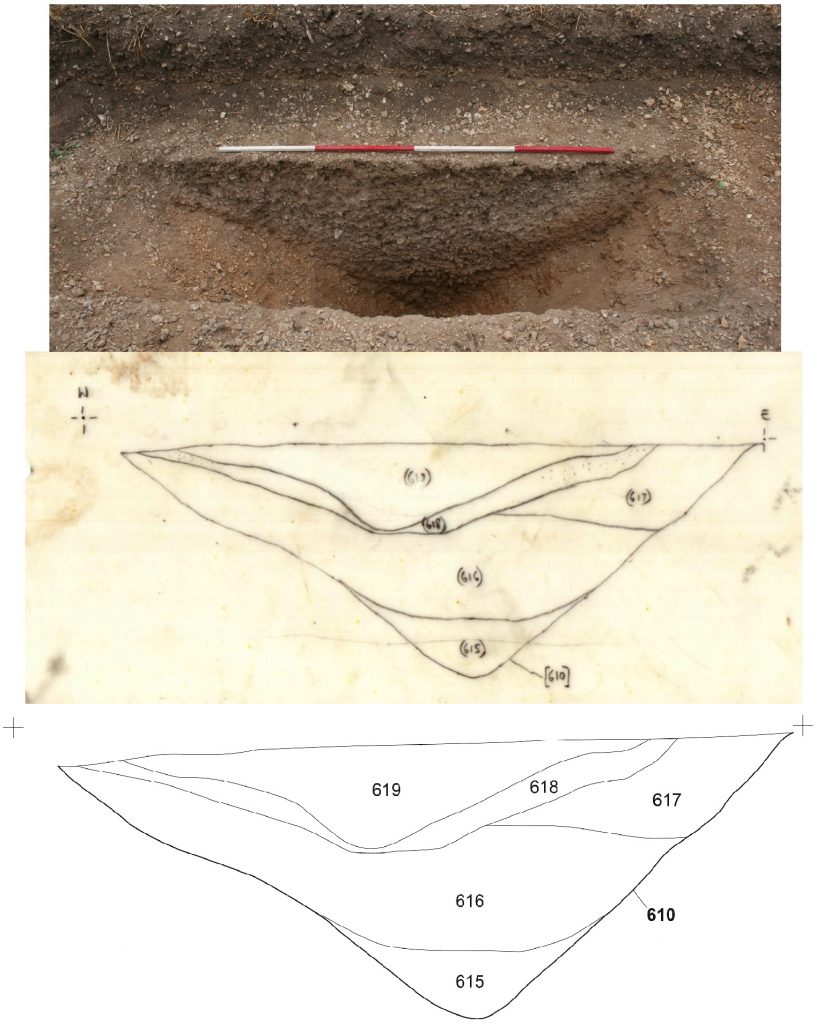 Once a slot through a feature has been dug, the exposed face can be drawn with the individual layers differentiated, given context numbers and the finds assigned to those layers. Where two or more archaeological features cross, a carefully placed slot through them will reveal which is the latest and which is the earliest, allowing you to build up a stratigraphic framework from which you can tell the story of the site.

Urban sites such as Silchester have to be dealt with differently. ‘Deep strat’ sites are often formed of metres of archaeological deposits with no sight of the natural geology on which they are based. In these instances each context must be fully defined and 100% excavated – this is why you will always see archaeologists trowelling, they are trying to identify the next layer to remove. In each urban site the latest deposit or layer must be defined, recorded and then excavated, a process that is repeated continually until there is no more archaeology left 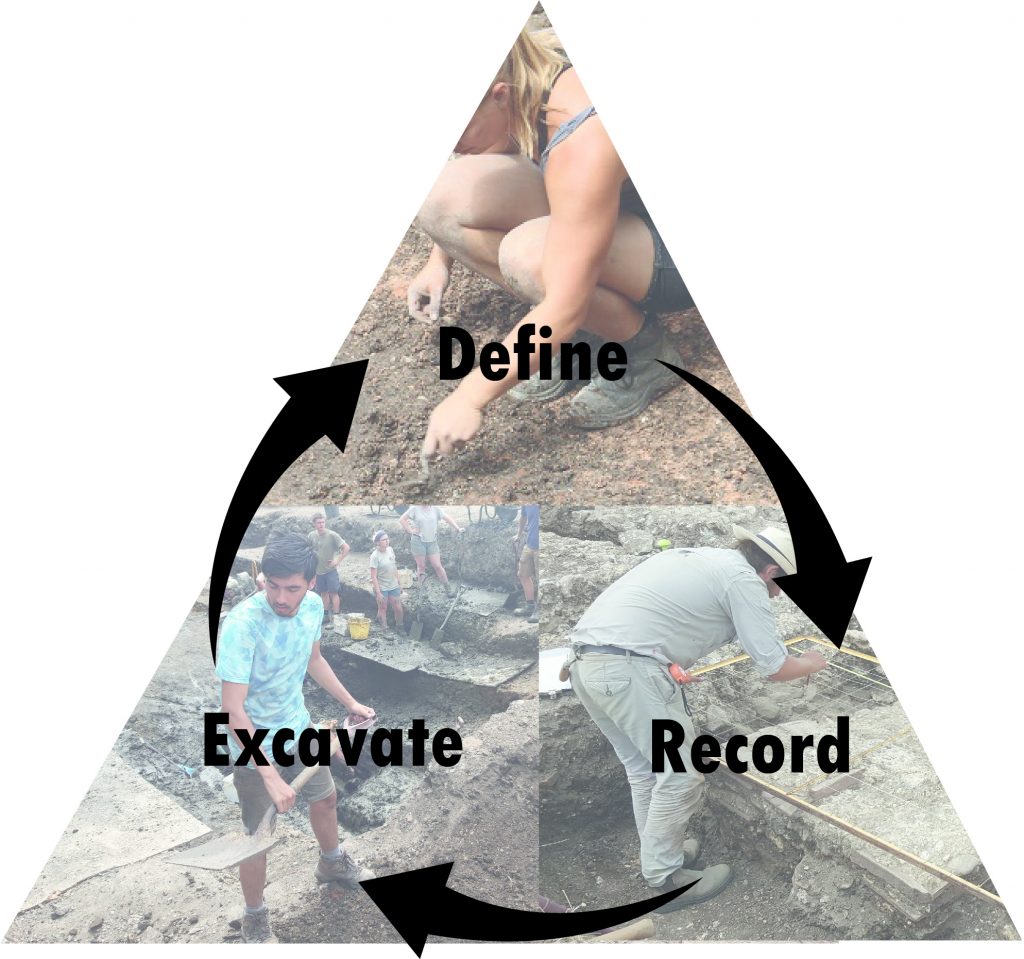 So what do we actually use to dig, this video shows the basic tools and techniques needed for the job

Digging is a rich and rewarding experience. This video highlights what it’s like to dig at Silchester, the sounds and the atmosphere

Find out more……Recording in depth

Recording is perhaps the most essential part of archaeology, without recording, all digging has no purpose and it is our duty as archaeologists to record everything to the best of our ability.

On site we record things in three ways, through the written record, the drawn record and the photographic record.

Here is a context sheet, the basic document that is used for recording each context. In the video below, Nick takes us through what filling out a context involves 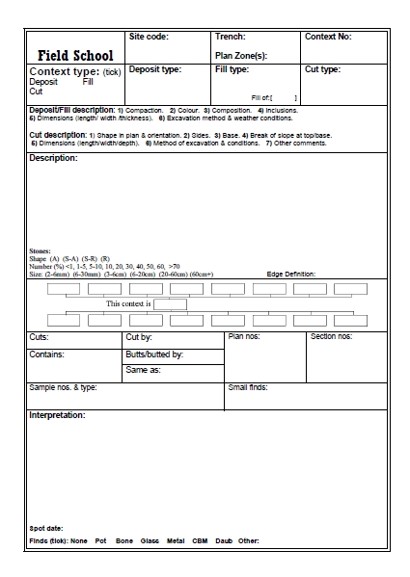 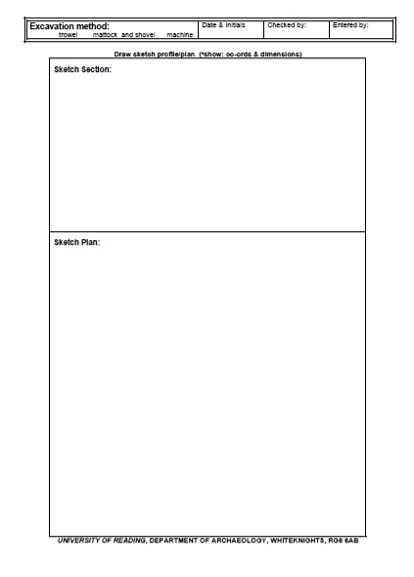 Each context is also drawn as plan, a scaled representation of the context drawn from above. Here’s a multi-context plan showing the types of things we might illustrate. In this video Dan takes us through how to draw a plan (in perhaps unnecessary detail) and the various conventions we use 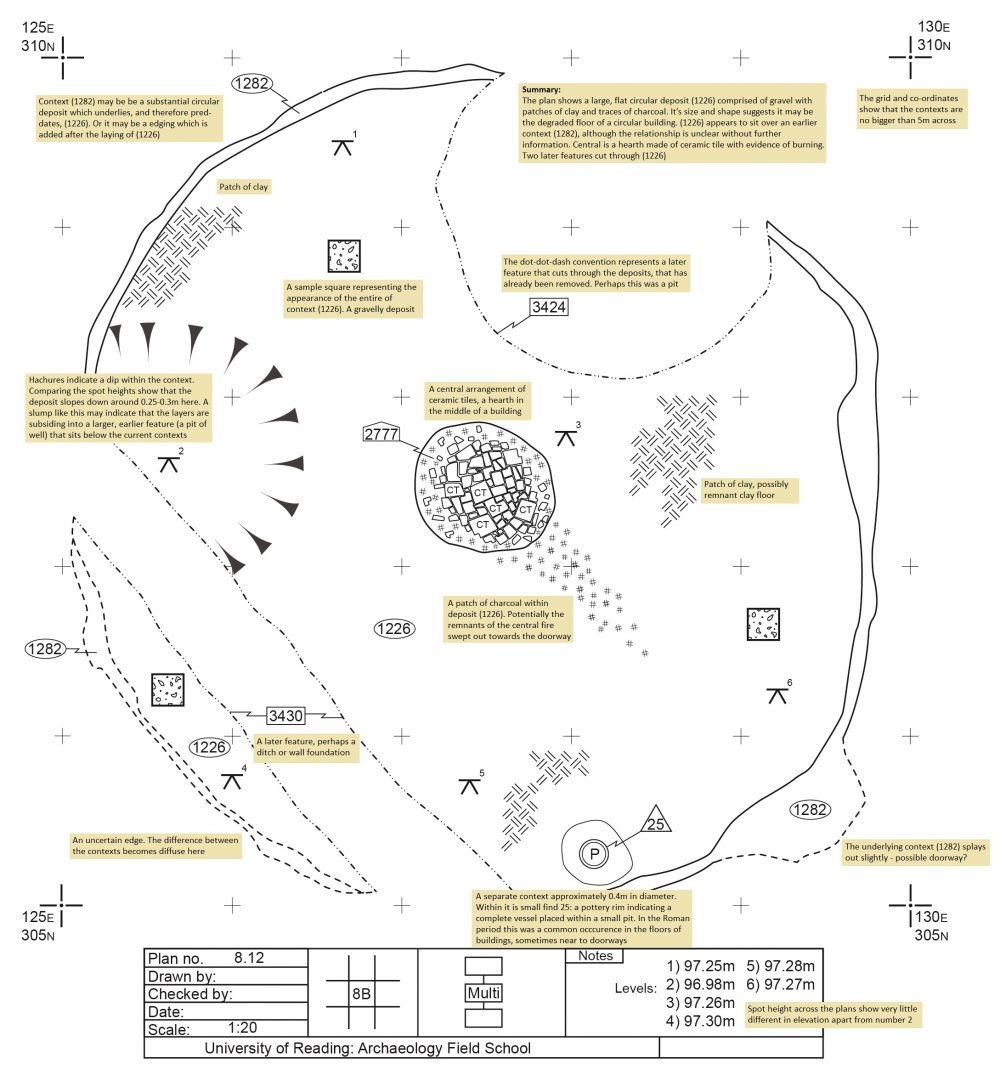