The four pits (marked C-F by the Victorians) were re-excavated in 1998 and found to be part of two parallel east-west rows of pits dug across the centre of House 1. Those encountered by the Victorians had either been excavated in whole (Pit C, Pit D) or in part (Pit E, Pit F). It is apparent that Pits C and F had been located while following the wall-lines associated with House 1. Pits D and E are cut through the flint cobble floor of Room 3 and were presumably located by the Victorians when they exposed the entirety of this surface. 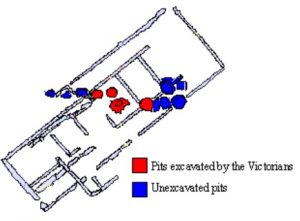 Pit C is an oval pit with a greatest width of c.2.05m and a depth of c.1.30m. This pit is located at the junction of 3 walls of House 1, and cuts through the cobbled flint floor of Room 3. During the season of 1998 this pit was re-excavated and three fills were identified within it: 1308, 1315 and 1346. These three fills consisted of dark brown friable sandy clays with a substantial amount of gravel and flint. This material is believed to be Victorian backfill and its presence suggests that the Victorians excavated this pit to its base.

Pit D is a circular pit with a diameter of c.1.65m and a depth of c.0.58m. This pit was cut through the flint cobble floor of Room 3 and contained three fills: 1309, 1805 and 1314. Once again these fills consisted of dark grey sandy clay with gravel and pebble inclusions. It is believed that the Victorians excavated this pit in its entirety.

Pit E is oval in shape and at least 1.5m in depth. Removal of the Victorian backfill revealed that there were actually two cuts here (1021 and 1386). Cut 1386 is square in plan, adjoining 1021. The Victorians did not distinguish the two pits and excavated them as one large pit. One of the original pits (1386) was bottomed by the Victorians, the other (1021) was originally a clay-lined pit and may turn out to have been cut into the top of an earlier well (not yet explored). The clay lining of pit 1021 extends under the flint cobble floor of Room 3, suggesting that this pit was open and in use at the same time as the floor. The upper fill 1251 was a grey-brown sandy silt containing gravel and flint and is certainly the Victorian backfill in these two pits. The fill beneath this (1299) is similar and was at first thought to be Victorian backfill until we recovered vessel 665 from within it. This is an Oxfordshire ware pot of 4th century AD date. Four further undisturbed fills were removed from within this pit during 1998, all containing assemblages of typical Roman finds, including two copper alloy toilet implements: a pair of tweezers and a small spoon. Removal of the clay lining 1395 and 1396 revealed an underlying deposit 2029, which remains unexcavated. It may be the top fill of an earlier well.

Pit F is rectangular in plan with sharp corners. It is 1.25m deep and 3.1m in diameter. It had a flat base. This pit was cut through 3 walls of House 1. It was filled with typical Victorian backfill material but it had only been excavated to a depth of 0.62m. The remainder of the backfill was excavated during the 1998 season and found to contain typical Roman material: animal bone, pieces of pottery and ceramic building material.

In the north-east of Insula IX the Victorians encountered one hearth: 1433. This was located approximately 0.5m below the late Roman surface and is probably first century BC/first century AD in date. It consisted of heavily burnt and fragmented tiles, and it shares the orientation of House 1. Our current excavations have not yet reached the structure that would have contained these features.