Major changes took place in the insula about the mid-third century. All existing buildings, including House 1, were demolished and wells filled in. A major new east-west property boundary was constructed across the site of House 1 and the space between it and the northern boundary of the block was divided into a number of equal-sized properties which fronted on to the streets. 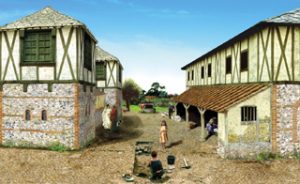 Over time a number of pits were dug along the boundary line, some containing special deposits of animal bone and pottery, like the two complete New Forest pots shown here. 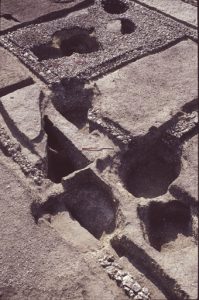 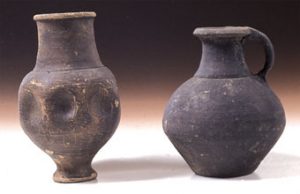 South of the major boundary there were two properties occupied by two-storied buildings of masonry or part-masonry construction. To their rear were cess pits, one of which contained a rich assemblage of organic material, reflecting the daily diet of the occupants. The southern house was significantly extended in the fourth century with a new façade with projecting wings linked by a verandah. By this time it appears as if the two properties were joined together and served by one well.

To the north, the property at the intersection of the streets was engaged in blacksmithing. Around the smithing hearth (see right) we have discovered scatters of hammerscale, tiny fragments of iron produced during the smithing process 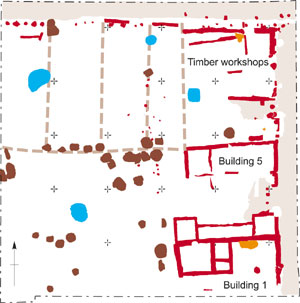 Many of the pits and wells in Silchester also contain plant and insect remains, pollen and fish bones which are retrieved from soil samples. These add to our understanding of the diet of the people of Silchester. Dr. Mark Robinson, our environmental specialist, has found exotic plants such as walnuts and figs, indicating high status occupation. Karen Wicks is working on pollen analysis which can show what plants were growing in the area, indicating the presence of gardens or derelict and weed infested open land.

Activities across the excavated area of the insula were of an artisanal or commercial character. Deposits of chopped and split animal bone from the rear of the two southern buildings suggest that one occupation consisted of the extraction of grease and marrow fat; another involved the preparation of stone and ceramic for mosaic floors. 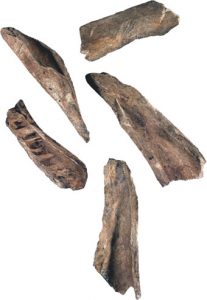 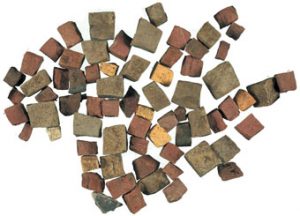 Ceramic building material is common in Silchester. Peter Davies records and studies the frequency with which different types of tile (such as the flat tegula or the curved imbrex tiles) occur. The discovery of roof tiles indicates that a substantial building with a well-built roof was located nearby and analysis can reveal whether concentrations represent a destruction event or the gradual reuse, dispersal and residual occurrence of older material.

The bones and teeth of animals found in Silchester can tell us about the diet of the inhabitants. By ageing and sexing the remains, our specialist, Claire Ingrem, can also analyse Romano-British husbandry practices and establish whether animals were kept for their milk, wool or meat. Most of the animal bones recovered come from cattle, sheep and pig but we have also excavated a number of complete dog skeletons which have been examined by Dr. Kate Clark. Although often badly treated in life, these dogs may have been placed into pits for ritual reasons.