An interesting insight into Victorian techniques of excavation was provided by the discovery of a pit dug into the intersection of the main north-south road through the town with the east-west street at the northern limit of the excavation. 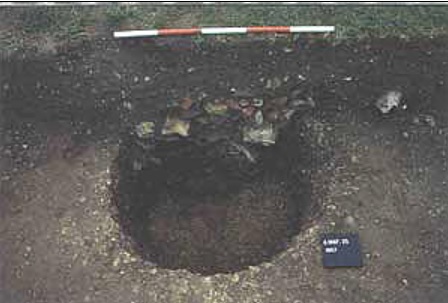 Most of the discarded items in the rubbish pit were Roman in date and included examples of rare items. If you want to learn more about the Roman finds thrown away by the Victorians, click here

This small circular pit was discovered almost directly beneath topsoil and was noticed initially as a darker circular area of soil (1001) distinguished from the rest of topsoil on the basis of the Victorian finds contained within it. Subsequent discovery of the cut feature below suggested that 1001 was the plough-mixed remains of the uppermost pit fill.

On excavation 1023 produced a sizeable amount of Victorian debris including tin cans, bottle-necks and ceramics, but also a large amount of Roman pottery.The material recovered from 1057 consisted mainly of Roman pottery and animal bones, but again mixed with ceramics, glass and iron which were obviously Victorian in date. 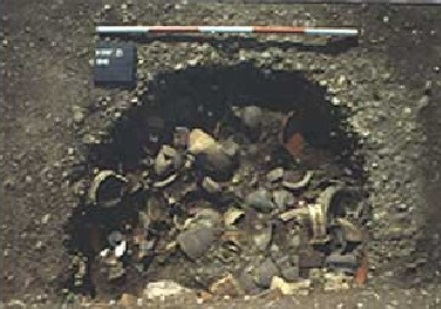 The pit measured 1.07m in diameter and 0.45m in depth. The cut was circular in plan with sharp and angular breaks of slope at both the top and bottom. It had a flat base and it had been filled with a mass of Roman material, principally pottery. The presence of Victorian items strewn amongst the Roman material indicates that this was a rubbish pit dug by the Victorian excavators to dispose of unwanted material from their excavation of the surrounding area. Examination of both the Victorian and Roman artefacts disposed of within this pit can tell us a great deal about the Victorian excavators: not only details as to their own working lives but also information about their discard policy.

Although none of the Roman finds represented complete specimens, a very large number of sherds of pottery, some with the potter's stamp intact, others representing the remains of very rare items, such as a possible Romano-British chimney pot, were disposed of without record.

In addition to a wide range of ceramics including several items not represented by complete specimens in the Reading Museum collection, the pit contained a number of bronze brooches, coins and other objects, including animal skulls, all Roman in date.

What did the Victorian excavators eat and drink during their lunch breaks? Click here to sift through the remains of their rubbish.