The Victorian plan of the north-east third of Insula IX (now the 55m by 55m square trench of the Silchester Insula IX excavation) identifies three wells (marked as such).

All three wells found and identified by the Victorians have been re-located and re-excavated. The most significant of these to date is the shallow well (1170) from which the celebrated ogham stone was recovered by the Victorians during their 1893 campaign. Re-excavation of this well in 1998 produced no new artefacts but did confirm the depth of the well at c.2.6m. The fill re-deposited by the Victorians after their excavation of the feature was found to contain quantities of building material such as flint and brick. The original excavators interpreted this pit as a well 'of the usual construction', although relatively shallow when compared with those other cut features at Silchester which are definitely wells, and which are regularly dug to a depth of 5-6m. There is no reason to doubt the interpretation; it certainly reached the present water table, but any timber lining did not survive. 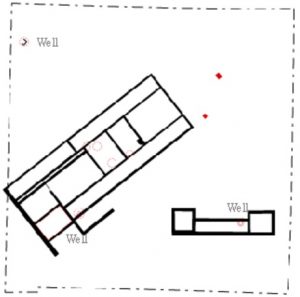 The ogham stone has been re-examined by Mark Handley, and new drawings made and photographs taken of both the ogham stone and the pierced pewter jug found lying beneath it. The context and significance of the ogham stone has recently been re-explored, see Fulford, M., Handley, M., and Clarke, A., 'An Early Date for Ogham: The Silchester Ogham Stone Rehabilitated', Medieval Archaeology 44 (2000), 1-23.

In the re-excavation of this well during the 1998 season of excavations, two pieces of oak were recovered right from the very base in a deposit believed to have been untouched by the Victorian excavators. These pieces of wood have been subjected to radiocarbon analysis to provide a date for the initial digging of the well. The radiocarbon age attached to the younger of these two pieces of wood gives a calibrated age at 95% confidence of A.D. 320-540 and a terminus post quem for the use (probably) and the final filling (certainly) of the well.

Victorian trenching into the north-west area of our site during 1893 revealed a well, 1503. In 1998 part of the Victorian backfill of this feature was removed, with the intention of completing excavation in 1999, when it was expected to reach undisturbed deposits. Excavation in 1999 however revealed that the Victorians had excavated this feature in its entirety in 1893, leaving behind only fragments of the original wooden lining of stakes and wattling, and some pieces of late Iron Age or early Roman pottery. The original depth of this well was over 4m and consisted of a roughly circular cut with a U-shaped profile dug through the natural gravel into the underlying clay. It is likely that the well was first dug in the late 1st century BC or early 1st century AD, but it is not possible to be certain how long it remained in use.

The early Roman well situated in the south-east of our trench (well 3011) was partially excavated by the Victorians during their 1893 campaign, and re-excavation of this feature was begun during the 1998 season and completed in 2000. Excavation in 2000 revealed at the base, more than 5m below ground level, an extremely well-preserved interlocking timber lining set on top of a square wooden frame, all of oak. Above this base the structure survived to a height of two tiers. This lining formed a square enclosing an area c. 0.5m by 0.5m. Unfortunately there was little of the original Roman well fill preserved as the entire shaft appeared to have been excavated by the Victorians. We know that the Victorians located this timber shaft during the course of their 1893 excavations as a reference is made to its size in the accounts of their discoveries.