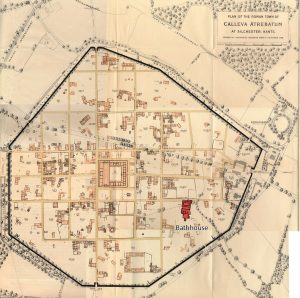 With winter seemingly taking an eternity to finally end, it’s always a surprise when the digging season sneaks up so quickly.

With less than a month to go until we start at the bath house our team have been busy behind the scenes preparing everything we need for the four week excavation. Most importantly perhaps is making the final decisions on where exactly we plan to put the trenches. Our general plan is to have two trenches, one at the north of the structure across the peristyle and latrine and one to the east of the building to investigate the undisturbed ground and Iron Age ditch. These plans have recently expanded slightly with the second trench now also extending to within the structure

This will encompass much of the northern extent of the building, extending onto the street and as far eastwards towards the spring as possible. The aim of this trench is to try and understand how the frontage developed over time and what happened once the main east-west street had been installed. The bath house is set slightly at odds to the usual cardinal layout of a Roman town suggesting that it’s initial construction pre-dates the laying-out of the street grid system. In fact, it’s much more obvious to see that the baths sit aligned with the Iron Age defenses of the early town, the building likely being sunk into the remnant rampart and the ditch used for drainage. The construction of the street thus significantly alters the front of the building with the early portico seemingly being removed and the smaller latrine expanding (at least according to the Edwardians). The latrine used the natural spring to wash away waste to the east of the baths and thus hopefully leaving a good amount of environmental evidence for us to discover. Analysis of such “deposits” should hopefully give us an unparalleled insight into the diets and lives of the people of Calleva but also provide evidence of the use of the baths themselves; were they used seasonally? did they stop being used at any point? were people using them to dispose of things other than human waste?

Trench 2 was initially aimed at looking to the east of the building at what we hope will be an area of undisturbed ground. The Edwardian reports describes this area as being “…filled with the deposit of black earth. It’s depth is considerable, and at the south end of the baths was nearly 6 feet….the black earth is so exactly like the mud that forms at the bottom of a pond”. As daunting as that sounds it may likely yield a fantastic range of environmental evidence and hopefully a sequence of untouched deposits that span from the earliest formation of the town to the eventual abandonment of the baths. What the antiquarians didn’t realise was that this “black earth” is the upper fill of the Iron Age defensive ditch combined with the outflow of the spring. In Rampier’s Copse to the south of the town walls, much of the early town defenses survive and are unbelievably huge; the surviving rampart measures over 6m high with the associated ditch pushing 12m  wide. This earthworks turns and runs northeastwards into the town and then, now barely visible, skirts the eastern side of the bath house. Trench 2 will therefore aim to cut through this ditch and see what lies within its lower reaches – whether or not this is realistic given the size of the ditch and the time-frame given remains to be seen.

Trench 2 will also expose much of the eastern wall of the baths and will hopefully show how the various phases of architecture developed over time. Much of our current understanding of the bath house is based upon the excavations carried out in 1903-4, however previous excavations, in particular at Insula III, have exposed the flawed interpretation of the antiquarians and it will be good to get a fresh look at the surviving architecture. Recently we have decided to extend trench 2 into the baths and expose one of the rooms. Room W as it is known was considered by the Edwardians to be a part of the very latest phase of the bath house. Seemingly built as an extension to the east of the tepidarium, the room appears to bear the hallmarks of a typical hypocaust fired from an external stokehole. A series of central pilae stacks lead to a number of flue channels that heat the room above and possibly the caldarium to the south. As expected however, this may not be the whole story. One of the photographs from the 1905 report shows  a corner of the room looking quite strange; a series of flue channels appear to have been excavated but from very high up and into what looks like homogenous dark soil. Is what the Edwardians recorded a badly excavated composite of a number of more complicated phases? I guess we’ll find out soon enough.