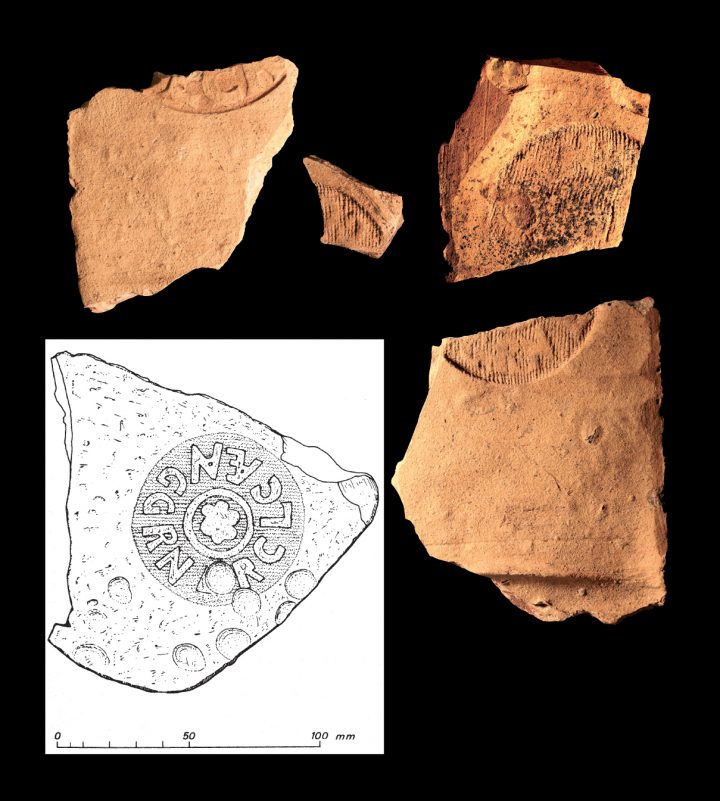 By Dr Sara Machin – CBM specialist for the the Silchester Project

Ceramic building materials (CBM) typically represent the largest category of artefacts recorded at Romano British sites.  Subject to selective retention policies, the potential of CBM to contribute to our knowledge and understanding of the construction industry and the development of both individual buildings and settlements more generally is often overlooked.  CBM was a new technology introduced within the first decade of the Roman conquest of Britain and was a very visible sign of Roman influence.

My recently completed PhD study comprised a detailed analysis of the fabric and forms of all the CBM retained from excavations at the Roman town of Calleva Atrebatum, Silchester.  The project employed detailed recording and multidisciplinary scientific analysis, portable X-ray fluorescence and thin section petrography, to investigate a large urban ceramic building material assemblage.  It has demonstrated the potential of existing CBM archives to add to site narratives by illustrating the variability within areas of the Roman town, between public and private building projects and throughout its Roman history.  The results have shown that the ubiquitous brick and tile, too long neglected, can provide a wealth of interesting data.

By comparing the fabric series with samples of local clay resources it has been possible to ascertain the geological formations that were exploited to produce the ceramic building materials.  A fabric series of the material has been established, comprising nine fabric groups.  The results have shown a reliance on local raw materials, with London Clay Formation sources dominating the collection (c.50%).  The CBM requirements at Roman Silchester were met by a small number of production centres supplying most of the building materials, with four fabric groups accounting for almost 90% of the material.  Some long-distance movement of materials has been identified, demonstrating the long-distance trade of standard bricks and roofing material as well as specialist products in the form of relief-patterned flue tiles. 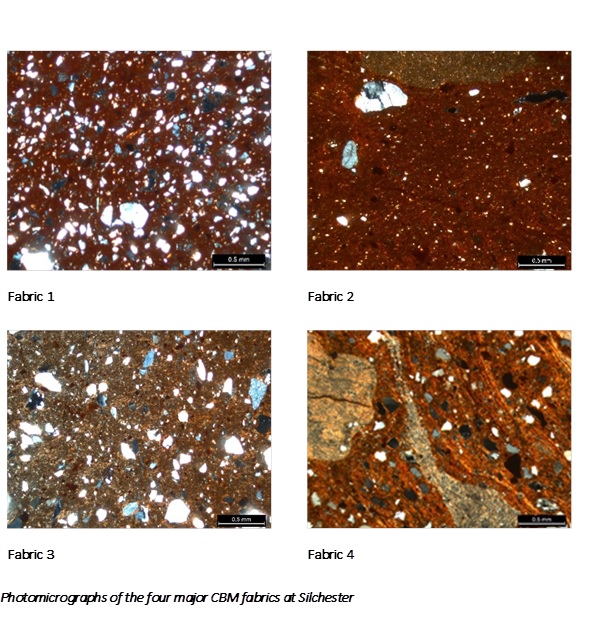 The Silchester materials show variation in terms of the consumption of different fabrics over the life of the town.  Ceramic building material can have a complex history of use, re-use, and disposal.  Therefore, even in the early phases of the development of Silchester, there is the potential for the re-use of material.

The current excavations at the bathhouse complex will provide a large assemblage of material which can be added to the data already collated for my PhD project.  The standing remains uncovered during the Society of Antiquaries excavation of the bathhouse, if still present, will provide a rare opportunity to record the fabrics of the CBM contained within structures, rather than working from existing archive materials.  The chronology of fabrics established for my PhD project can be tested using phasing of the bathhouse construction.  The public baths were located in the south-east quarter of the town beside the spring supplying their water.  They were among the earliest Roman buildings in the town, oriented at an angle of 9° to the street grid and assumed to pre-date it.  Ceramic tiles found at Silchester bearing the abbreviated name and titles of the Emperor Nero (r. AD 54-68) evidence imperial support for the development of early Roman Calleva.  These tiles were manufactured at the brickworks at Little London, about 3km to the south of the town.  Such tiles have been found in Britain only at Calleva and Little London.  The proposed early date for the public baths make this a candidate for the Neronian building project.  Brick and tile in the fabric originating from the Little London tilery peaks in contexts dated to the Claudio-Neronian/Pre-Flavian phases of the town (c.AD43-68).  If this distinctive fabric can be identified in the earliest phases of the bathhouse it would support the proposed early Roman date for the bathhouse.