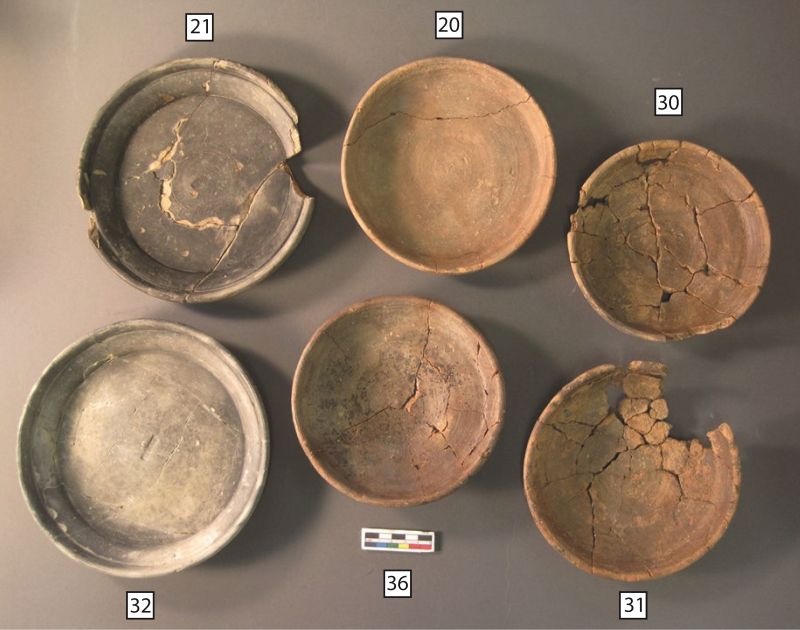 In the summer of 2016 the Silchester Environs Project conducted a small-scale excavation comprised of ten evaluation-style trenches across Windabout Copse near Mortimer. Aerial photographs, geophysics and cropmarks across the field hinted at a number of archaeological features that were proved to be a small Iron Age settlement enclosure.

To the north of this settlement a smaller square mortuary enclosure contained a Late Iron Age chambered cremation burial – the resting place of a high status individual. Eight complete pottery vessels – six platters and two drinking cups – had been placed at the base of the grave along with the cremated remains of the individual and a number of copper ring fittings, potentially from a wooden box. Overlying this was then a series of burnt oak timbers that had either formed part of the roof of the chamber or were remnants of the funerary pyre placed into the grave before it was sealed. 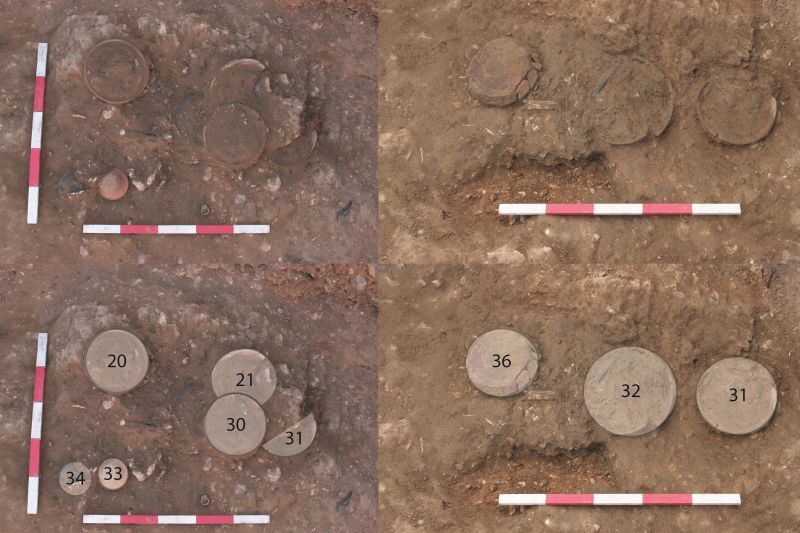 Furthest tucked into the corner were four stacked platters (21, 30, 31 and 32) all of which were upward-turned and between 0.16m and 0.2m in diameter. Platters 21 and 32 were high-status terra nigra Gallo-Belgic imports whilst the 30 and 31 were local course-ware made in an imitation terra rubra-style. The two imported vessels were considerably more fragmentary than the others and 21 had a significant piece missing from the north-western side. This piece was found approximately a metre away to the south-east suggesting that this platter may have been ritually broken prior to its deposition in the grave or may disturbed by later grave-robbing. Platter 32 had a clear makers stamp. To the south two further platters (20 and 36) of around 0.17m in diameter sat directly on top of one another. Both were made of a similar local red course-ware and the lower of the two had been placed upside down. Slightly to the east were two small upturned continental drinking cups positioned closely together. The northernmost of the two, 33, was of terra rubra ware and measured 0.08m in diameter. The southern example, 34, was of terra nigra style, 0.09m in diameter and had a clear maker’s stamp on the inside base.

A number of the vessels and their contents were analysed for evidence of organic residue left on  the surface of the receptacle or within the pottery itself. The organic solvent soluble components of living organisms, known as lipids, are highly resistant to long-term decay and therefore survive well in archaeological contexts. Examples such as animal fats, waxes and resin can all be identified through lipid analysis and can give a good insight into the use of pottery and the types of resources used in the wider environment.

Samples taken from the pottery fabric of three of the platters prior to conservation yielded a range of exciting results summarised as thus:

Platter 30: used to process or serve ruminant carcass products. Coniferous (Pinaceae) tree resin was also identified (mixed with the animal fats or a sealant?). This seems odd given the lack of coniferous types likely to have been locally available in the Iron Age.

Platter 31: contained degraded animal fats, it was used to process both porcine and ruminant remains