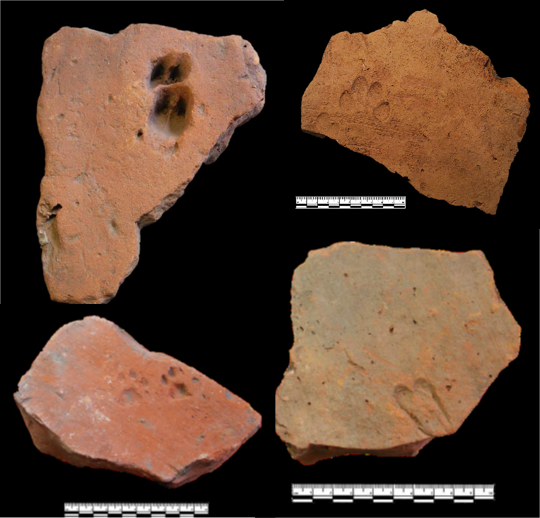 Footprints on Roman brick and tile

Animal, bird, and human footprints are often found on tile, the impressions having been made whilst the tiles were laid out to dry before firing. Zooarchaeological remains from Roman settlements are evidence of the meat consumed, secondary products made, and livestock kept in the urban centres.  By considering the footprints recorded on Roman brick and tile assemblages, we can establish a picture of the environment and infrastructure surrounding their production and seasonality of the production cycle.

It is traditionally assumed that tile making in Britain was restricted to the summer months, to facilitate the laying out of tiles to dry during the least inclement weather. Indeed, a study of all tiles that have been marked with dates before firing evidenced the making of tiles to be a seasonal activity, with brick forming taking place in the summer and early autumn.   The practice of more recent traditional industries in north-west Europe also suggests that brick-making was a summer occupation. This however relates only to the forming and firing of the tiles, the other related activities of clay preparation, weathering, and timber felling for fuel would be autumn and winter tasks. The extraction of clay would be carried out in the autumn, with the clay left to weather over the winter months before bricks are formed and left to dry. The collection of wood for the firing of the kiln was also best undertaken in the winter months, when the trees were bare of foliage.

The presence goat/sheep would indicate that a tilery was integrated with or at least located close to a farmyard or pasture.  Cattle prints are dominated by those made by new-borns unsurprisingly as a brick stood on by a fully grown cattle would be rendered useless.  Cattle calve all year round, whilst not indicative of seasons, it is indicative of animal breeding and dairying.  Whilst young and new-born sheep footprints evidence the season in which tiles were left out to dry as the lambing season peaks in March and April.

Mammal prints are dominated by domestic species with dogs representing nearly 75% of the prints identified in the Silchester collection with cat prints accounting for a further 16%.  The wide range of dog pawprint sizes reflects the variability in the sizes of dog breeds in Roman Britain, although, the pawprint does not give indication of the breed or age of the animal.

Conditions in Roman Britain certainly offered scope for a mixed avifauna, even though the extent of ‘wild’ areas was probably not significantly greater than it is today. Seasonality of brick-making is also identified in the bird prints, with the example of a crane print being small and therefore made by a young bird.  Crane colts generally hatch from May to July.  The wild bird prints include both wading and perching species evidencing the proximity of the freshwater and woodland to the kilns.  The domestic bird prints identified were made by chickens, with one example showing a bent fourth toe, evidencing a previous breakage with sufficient rehabilitation for the bird to be walking across drying tiles.

Both red and roe deer prints have been identified on Silchester bricks.  Roe deer favour wooded habitat, again showing a proximity of woodland to the kiln.  Red deer prints identified included both adult and young animals, with hinds calving between mid-May and late-July.  Red deer also inhabit wooded environments and are often found on farmland fringes.

The footprint evidence from the Silchester assemblage does not point to large-scale farming activities taking place alongside tile production. The Romano-British rural landscape was a mixture of arable, meadow and pasture land, dotted with small settlements and farms with some evidence of woodland clearance. The domestic species identified from the footprints suggest small-scale animal husbandry which would not be incompatible with the time-consuming practice of tile production. The keeping of some livestock would be more manageable than maintaining arable crops where the seasonality of crop management and tile production would invariably clash. The scale of some of the Romano British brick and tile making complexes with multiple kilns operating and the amount of work that would have been necessary for the construction, maintenance, and operation of these would make any supplementary time-consuming activities improbable. Some tile-makers were, it seems, engaged in livestock rearing albeit on a smaller scale than typically assumed and perhaps only to meet their own subsistence needs. An impression of the landscape and environment surrounding the tileries can also be derived from the footprint evidence. Unsurprisingly, it shows that tileries were situated close to both wooded areas and water sources, both key resources needed for the large-scale production of ceramic building materials.