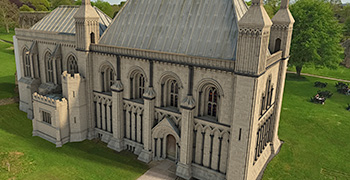 The Lady Chapel was built after fire had destroyed the ‘Old Church’ in 1184. The exterior walls are still standing, but the exterior has lost much of its contrasting stonework detail, whilst inside, the floors and roof are gone and the interior decoration has been almost entirely lost. The digital modelling of the Lady Chapel was an opportunity to recreate the spiritual core of the medieval abbey, the chapel where pilgrims venerated the Blessed Virgin Mary and the site of the former church associated with Joseph of Arimathea.

Discover how we researched our visualisations below, or visit our ‘Digital’ section for more information on the Lady Chapel itself: The Lady Chapel (c.1185 – 1539)

The model was created as three distinct sections: the exterior, the interior, and the crypt chapel. The first to be tackled was the reconstruction of the exterior appearance, using drone footage of the chapel today as a base onto which to map the model. Lost features and details were recreated using the archaeological evidence provided by recent excavations and study of the standing fabric. The contrasting door and window mouldings of blue-black Purbeck marble were reinstated, which had been robbed out, and lost architectural details were recreated such as the tops of the corner turrets. Glass was put back into the windows, although this is more apparent in the interior model. The work necessary to recreate the exterior was comparatively limited, but the visual impact of the reinstatement of the Purbeck details was very striking and made a strong contrast with the exterior as seen today. View the completed exterior animation below.

The second phase was the re-imagining of the interior decorative scheme. The colour palette was provided by paint traces surviving in the recesses of the wall arcade carvings and on the face of the stone itself (particularly in the window recesses). These traces showed a rich palette of red, ochre, blue, green and white with applied gold leaf, and some scant indications of the patterns used, such as flowers, stars and the moon. Much of the scheme shown had to be based on comparison with other sites and we drew on a contemporary scheme from Worcester Cathedral’s Chapter House for the ceiling motifs. For more details on the painted decoration of the Lady Chapel see Jerry Sampson’s report at: http://archaeologydataservice.ac.uk/archives/view/glastonbury_abbey_2007/

The recreation of the glazing, of which nothing indicative survives, was based on contemporary windows in Canterbury and Chartres cathedrals. Lady chapels typically included a lot of Marian (ie. the Virgin Mary) imagery, as well as crucifixion and Passion iconography. The surviving carvings on the north and south doors of Glastonbury’s Lady Chapel depict the Life of the Virgin and the cycle of the Creation, respectively. We have assumed that interior imagery would have depicted similar themes. We reinstated a stone screen or pulpitum to separate the nave of the chapel from the chancel, behind which would have been the miraculous image of the Virgin saved from the 1184 fire. This, like the rest of the chapel, was in a deliberately archaic style. Our completed animation of the Lady Chapel interior can be seen below.

The most striking feature of the model is the number of ex votos offerings hanging from the ribs of the vaults around the altar, a common practice at shrines and places of healing. Many small pin or nail holes can be seen in the ribs of the vaulting and these are interpreted as evidence for this practice. The form of these ex votos varied according to the benefit believed to have been received from the saint: we have chosen a mixture of healing votives (heads, hands, etc) and those given in thanks for safe travels, successful trade and the birth of healthy children. We drew on surviving examples from Exeter and the continent, as well as depictions in stained glass, such as those in the fifteenth-century St William window in York Minster. 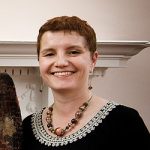 Louise Hampson is the Research and Communications Officer at the Centre for the Study of Christianity and Culture. She read Medieval English and History at Birmingham University and has an MA In Archive Administration from UCL, and has recently completed a part-time PhD at York on the history of the stained glass of York Minster since 1500. Louise’s research interests are stained glass, manuscript art and Viking and Anglo-Saxon culture.