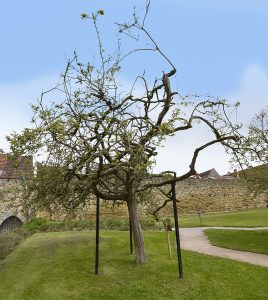 The Holy Thorn at the Abbey

When Joseph of Arimathea arrived in Britain he is said to have landed on the island of Avalon (aka Glastonbury) and climbed up to Wearyall Hill. Exhausted, he thrust his staff into the ground and rested. By morning his staff had taken root and grown into a miraculous thorn tree that bloomed twice a year. Descendants of this tree survive in Glastonbury today, including one at the abbey. Every year the Queen is sent a budded branch at Christmas that comes from the thorn in St John’s Churchyard in Glastonbury.