The buildings of Henry of Blois

Henry embarked on an ambitious programme to rebuild the monastery on a grand scale. Many of his buildings were destroyed in the fire of 1184.

“He built a palatial residence, which was called ‘The Castle’, a bell-tower, a chapter house, a cloister, a wash-house, a refectory, a dormitory, an infirmary (with chapel), a noble outer gate of masonry, a great brew-house, and a number of stables – all his own from top to bottom. They bore witness by their style and strength to his great-souled energy. He built fine buildings also at the manors, and wherever they were suitable.”
(Adam of Damerham, Historia de Rebus gestis Glastoniensibus, 13th century) 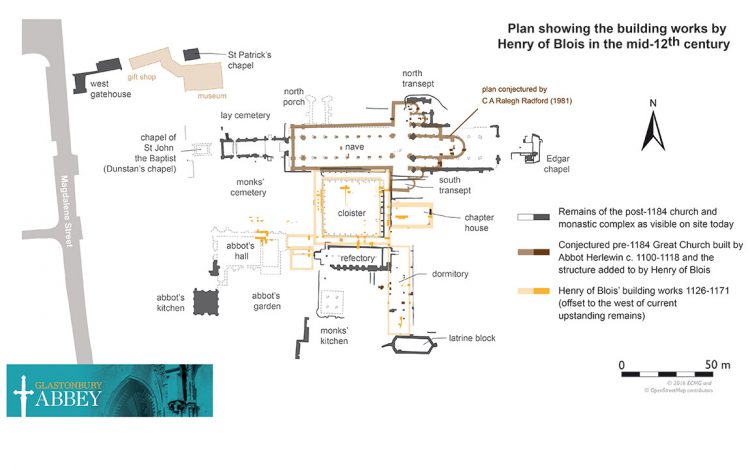 In the early 19th century, two carved stones of remarkable quality were found near the abbey church. Similar fragments of polished blue lias (local fine-grained limestone) were found in later excavations. These are the remains of the cloister built by Henry of Blois in the mid-12th century. They are what remained after the fire of 1184.

Henry used dark marble imported from Tournai in France for sculpture at Winchester Cathedral. At Glastonbury, the local blue lias was used instead. The skills of medieval stone masons were as highly developed as those of artists of books, ivory carving and gold-smiths. 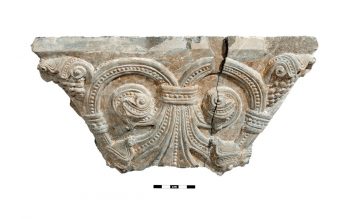 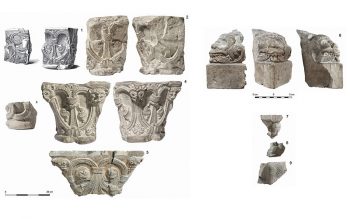 Fragments of sculpture illustrated by John Buckler and published by Richard Warner in 1826, and capitals from the Romanesque cloister built by Henry of Blois at Glastonbury.

Excavations at Glastonbury uncovered 40 fragments of blue lias stone sculpture. Recent research shows they were part of the mid-12th century cloister. The fragments came from arcades around the central courtyard.

The shafts were carved with spirals and chevrons. They were grouped in pairs with clusters of four columns at the corners of the cloister. The capitals were carved with leaves, flowers, berries and human figures. They are amongst the finest Romanesque sculpture in England.

View the animation below to see where existing stone fragments visible at Glastonbury Abbey today fit within the cloister structure.