Archaeology of the Complex

Absence of the West Range 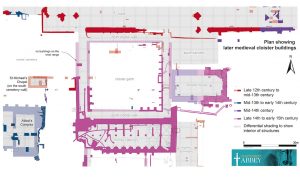 The abbot resided and dined separately from the monks. He had his own range of buildings including a substantial house, a chapel and a separate kitchen.

The space may have been kept clear of buildings because of its proximity to the sacred site of the ‘Old Church’ and its cemetery. This stood to the west of the medieval abbey church and was visible across the abbey site. 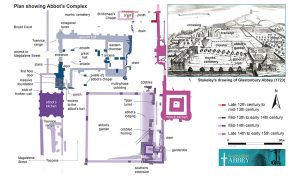 The abbots of Glastonbury lived to the south-west of the cloister in lavish accommodation similar to that of a high-status medieval manor house. The chronicle of Glastonbury states that Abbot Henry of Blois, the younger brother of King Stephen, built “a beautiful and spacious palace” in the 12th century.

Archaeological evidence confirms that the abbot’s hall complex was remodelled as styles and tastes changed. From the early 14th century a new complex was created in the latest style for the abbot and his guests. This included a spacious court c.70m square and a grand hall and porch with a waiting room. The site provided accommodation, a chapel, kitchen and service range and walled garden.