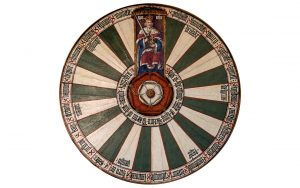 The tomb of Arthur and Guinevere was opened in 1278 during a visit by Edward I and Queen Eleanor. Edward had a strong interest in Arthurian legends and objects such as the ‘Winchester Round Table’, which he believed had belonged to Arthur. Edward built his own round table at Windsor and identified closely with the Celtic king, claiming to have “recovered Arthur’s crown” with his defeat of the Welsh Prince Llewellyn.

John of Glastonbury described the royal visit of 1278. He says that they “found there in two separate chests, decorated with their portraits and arms, the king’s bones, of wonderful size, and those of Queen Guenevere, which were of great beauty”. The bones were wrapped in cloth and placed in the chests for reburial by King Edward and Queen Eleanor the next day.

“They marked them with their seals and directed the tomb to be placed speedily before the high altar, while the heads and knee-joints of both were kept out for the people’s devotion”

In December 1331, King Edward III and Queen Philippa visited Glastonbury Abbey. Abbot Adam of Sodbury paid the huge sum of £800 entertaining them and a description of the visit survives. Queen Philippa arrived at the door of the church and processed with the monks to the choir. She prayed at the high altar and offered a cloth of web silk with gold drops (possibly a fine silk or net). 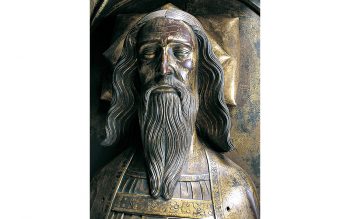 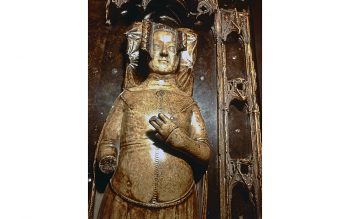 They then proceeded to the treasury where the prior described the abbey’s antiquities to the queen, before going to the cloisters which were decorated with gifts for the royal couple. King Edward III arrived a day or so later on horseback and was received at the church before proceeding to the choir. He prayed at the high altar before offering a cloth of gold which was the length of the altar. In return for their hospitality, the king granted rights and privileges to the monks.