After the exhumation in 1191, the remains of Arthur and Guinevere were placed in a tomb in the abbey church. This was the tomb which was opened in 1278 for the visit of King Edward I and Queen Eleanor. The abbey chroniclers state that this was located “in the choir, before the high altar”. The tomb was described by the antiquary John Leland when he visited Glastonbury in the 1530s. According to Leland, the tomb was of black marble with four lions at its base, a crucifix at the head and an image of Arthur carved in relief at the foot.

It appears from this description that the design was based on classical sarcophagi. This style may have been chosen to stress the ancient lineage of Arthur, who was believed to be an ancestor to the Saxon kings. Sadly, no fragments of the tomb or the bones that it contained are known to survive. The reconstruction is based on similar 13th-century marble tomb-chests which survive in Cordoba (Spain) and on Henry of Blois’ own tomb in Winchester. 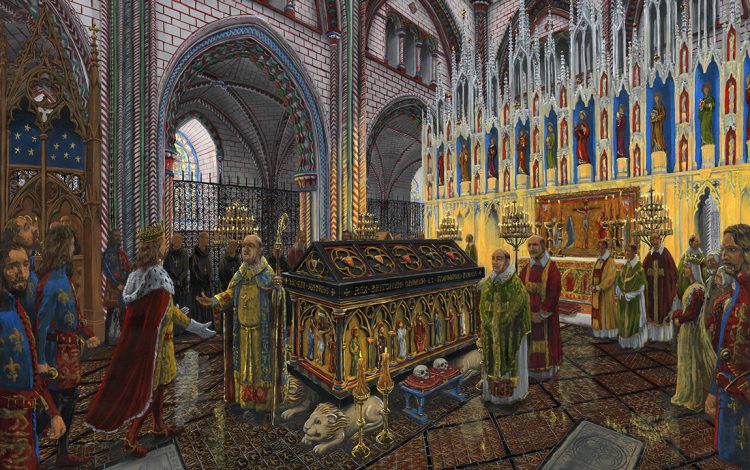 An illustrative reconstruction of the visit of Edward III to King Arthur’s tomb in December 1331 (© Dominic Andrews, www.archaeoart.co.uk)

Arthur’s tomb was placed centrally before the high altar, the place of highest honour. This would mean the king was ‘present’ at every celebration of the mass and at the heart of the abbey’s religious life. The tombs of the Saxon kings buried at Glastonbury were placed on either side of Arthur’s tomb. Edmund the Elder was reburied to the north and Edmund Ironside to the south. 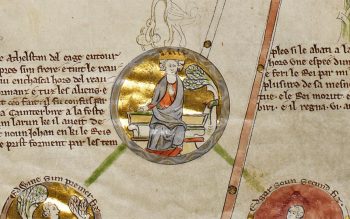 Edmund the Elder in ‘Genealogical Chronicle of the English Kings’ (© The British Library Board, Royal MS 14 B VI) 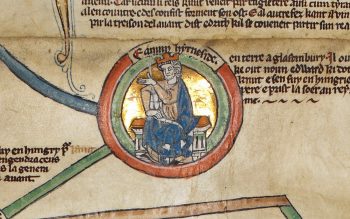 Edmund Ironside in ‘Genealogical Chronicle of the English Kings’ (© The British Library Board, Royal MS 14 B V)

By placing the tombs in this way, a royal Saxon mausoleum was created at Glastonbury Abbey. This reinforced the connections with the reigning kings and emphasised Glastonbury’s ancient foundations and long-standing royal connections.

Gerald of Wales said that Arthur’s grave was located between two stone ‘pyramids’, which might suggest that something or someone important was buried there. These ‘pyramids’ were first described around 1130 by William of Malmesbury, who states that they were very old and carved with figures and names. He couldn’t read most of them, which he took to be a sign of their antiquity, but made no guess as to their age.

Modern scholars think the ‘pyramids’ were late Saxon cross shafts and fragments of similar objects have been found at Glastonbury Abbey. 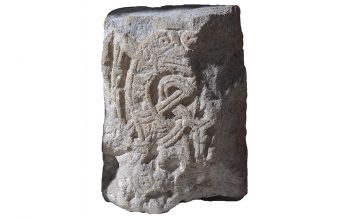 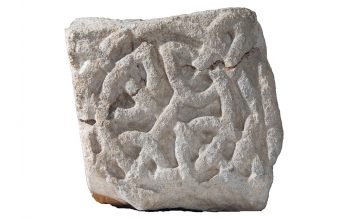