What is a cloister? 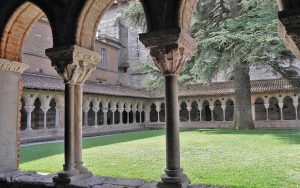 At the centre of a medieval abbey stood the church and three buildings arranged around a central courtyard. The abbey’s spiritual life focused on the church and daily services, but the daily life of the monks was based around the architecture of the cloister. This created a physical connection between the various buildings of the monastery and reminded the monks that every aspect of the day was part of their life of prayer.

The central space of the cloister was a garden for quiet contemplation. Excavations at Glastonbury found a central garden with a path around the edges. Watercourses and drains crossed the cloister sending water to the refectory. Covered walkways linked different areas and created space for study. For example, there is evidence in the north walk of the 15th-century cloister for individual booths which would have been used for private study.

View the animation below to see where existing stone fragments visible at Glastonbury Abbey today fit within the cloister structure.

By the 11th century, the cloisters of Benedictine monasteries had a standard plan. The church formed the north range, with the main buildings to the east, south and west. The east range contained a ground-floor chapter-house, used for the monastic daily meetings, with the monks’ communal sleeping space situated above. The south range was the monks’ dining room, where spiritual readings accompanied meals. The west range usually held private accommodation for the abbot and his guests. 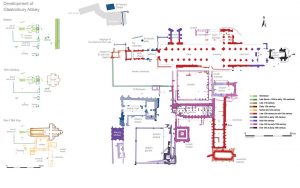 However, Glastonbury’s monastic plan is highly unusual. Archaeological excavations confirm that there was no west range. Instead, the abbots developed their own palace to the southwest of the cloister. The west range was omitted in order to avoid building on the sacred space of the monks’ cemetery and blocking the abbot’s view of the Lady Chapel.

The abbey’s most sacred space was the Lady Chapel, built on the site of the ‘old church’, rather than the high altar of the great church. It was believed to have been built by Joseph of Arimathea, and its religious significance attracted pilgrims and made it a focus for burials.