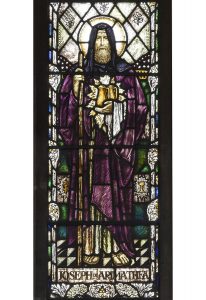 Joseph of Arimathea was, according to the Bible, the man who was responsible for the burial of Jesus Christ after Jesus’ crucifixion. He is also sometimes referred to as the great uncle of Christ. By the late 12th century or early 13th century, it was claimed that Joseph had brought the Grail to western Europe and was the leader of early missionaries who came to Glastonbury in AD 63.