Who was Henry of Blois? 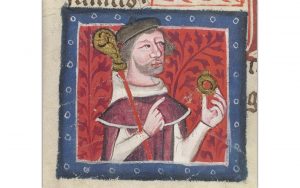 Henry of Blois holding his bishop’s crosier and ring in the Golden Book of St Alban’s, 1380 (© The British Library, Cotton Nero D.VII f.87v)

Henry of Blois was the grandson of William the Conqueror and younger brother of King Stephen (1135-54). He entered the great Benedictine Abbey of Cluny in Burgundy aged 10, where he later became a monk. In 1126, while still only in his 20s, he was made Abbot of Glastonbury by his uncle, King Henry I. Henry of Blois commissioned his friend and esteemed scholar, William of Malmesbury, to write a history of the abbey, emphasizing its antiquity and importance.

After three years at Glastonbury, Henry was also appointed Bishop of Winchester. He refused to give up his role as abbot of Glastonbury and held both offices until he died in 1171. His power was greatest for the four years when he was the personal representative of the Pope in England (1139-43). However, when Henry II became king in 1154, Henry of Blois’ political involvement ended. He directed his energy into church affairs and building projects at Glastonbury and Winchester.

Henry of Blois as Architectural Patron

As a royal prince, Henry of Blois was connected to the courtly culture of Norman England and northern France. Henry also drew on his early experience as a monk at the great monastery of Cluny when planning and undertaking his building projects at Glastonbury. 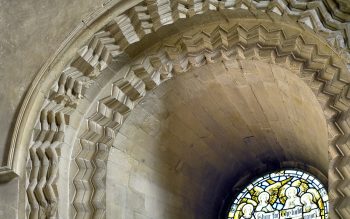 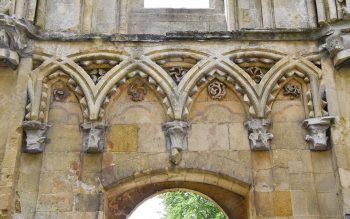 Henry’s passion for building led to many grand-scale projects and there are stylistic similarities across many of them. Sculptural carvings at Glastonbury are similar in style to his palace at Wolvesey, Winchester. The use of chevrons in Glastonbury’s Lady Chapel is also seen in his hospital at St Cross, Winchester. 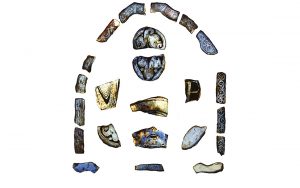 Henry was a key figure in the ’12th-century Renaissance’, an extraordinary period of artistic flowering in English art and architecture. He travelled widely and commissioned the highest quality work for his beloved Glastonbury. For example, fragments of (durable) blue glass were found at Glastonbury. The same type of stained glass is also found in contemporary glazing schemes at York, Chartres, and Saint-Denis.