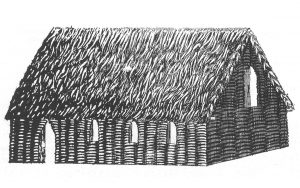 The Old Church as envisaged by Henry Spelman in the mid-17th century.

Glastonbury Abbey claimed to have developed from the first church in Britain, founded by Joseph of Arimathea and twelve followers in AD 63. William of Malmesbury gave an account of the Old Church, or vetusta ecclesia, describing it as a wattle building, which was later covered in wooden planks and roofed with lead by Paulinus (the English missionary who was Archbishop of York in 625–33).

Antiquarian excavator, Bligh Bond, reconstructed the early church as round and set within a palisaded enclosure with twelve cells. The church was burnt down in 1184 and was completely destroyed. The Lady Chapel was built on what is thought to have been its location.

Find out more about the Legend of the ‘Old Church’.